August 08 Is Crying On The Dancefloor

We talk to the 88rising artist about his new single ‘Simple Pleasures’, writing for DJ Khaled, and making pacts with Duckwrth and Channel Tres.

It was an early Monday morning when I hopped on the phone with August 08. I was in Adelaide, he was in Sydney, but we were both trying to do the same thing: chill. For me, it was much easier. I’m not an in-demand R&B artist signed to both 88rising and Red Bull Records. I also can’t claim writing credits for the likes of DJ Khaled. After this phone call, I was going back to doing nothing. August, however, was going back to work.

August was down under on a promo run, promoting his newly released single ‘Simple Pleasures’, a melancholic yet upbeat dance track. It’s in the same vein as August’s previous single ‘Blood On My Hands’ with Smino, but a notable change in direction from his sombre, open book 2018 EP Father.

The Long Beach crooner is part of an eclectic new wave of L.A artists that includes his friends Duckwrth and Channel Tres. Like these artists, August expertly mixes genres—R&B, hip-hop, soul, and dance—with raw, honest lyrical content. He doesn’t shy away from exploring his vulnerabilities.

During our conversation, we touched on the new L.A scene, his experiences writing for other artists, and what crying on the dancefloor really sounds like.

Hey August! I’ve read that you taught yourself to play the piano and other instruments watching Youtube videos. Where did that drive to learn come from?
My cousin inspired me to learn instruments. He was singing to girls, and that made me want to do the same thing. I wanted to learn to sing so I could get the girls just like him [Laughs].

With programs like Ableton Live and FL Studio, we’re living in an era where you don’t really need to play an instrument to make music. What do you think the benefit is of learning?
Music theory man. It’s a hard thing to learn, and it threw me off when I was teaching myself. But it really is the key to life. Because of it, I can make music myself. I don’t need anyone else. It’s fun to collaborate and work with other people, but being a musician and knowing how to play instruments gives me the comfort of being self-sustained.

Your EP Father came out last year. It really is a unique project. How do you feel about the reception thus far?
The reception has been great. We’ve done a few tours and travelled in less than a year. And I’m in Australia right now. The response to the music has been amazing.

The EP feels like an open book. You’re putting all your emotions on the table. Can you tell me about the process of recording this project?
I wrote, produced, and recorded the first five songs on the project in two days. Then I sat with them for like two to three months, before making more. I made Father because at the time I was going through some things family-wise, and my manager had told me to make a project about how I was feeling.

At the time, I wasn’t an artist, I was writing songs for other people. He said, “Just make some music and whatever comes out, comes out.” That turned into this project.

The chorus from your song ‘Lately’ has the lyric “the only thing real in my life is the suicide doors on the Lambo.” Does that still ring true today?
Honestly, it still kind of rings true. But I have found more joy and love through my friends. That lyric was an outcry, and after my friends heard the project, they came closer. They were like “You’re going through something, let us be there for you.” I found realness in my friends and my family.

The world of hip-hop and R&B can be very materialistic. Do you think that makes it harder to find something real?
I think fame makes it harder to obtain realness for sure. People want to see you as more than what you actually are. But we’re all the same, we’re all created equal. As human beings, we all deserve the same rights.

I think when you start to obtain fame, people show more love and put you on a pedestal. But during that process, they take away the humanity that you’re seeking. It’s hard sometimes to see through the shit in front of you and find what’s real.

Do you think the person you were when you recorded Father is different from the person you are today?
Absolutely. I gained so much confidence from being vulnerable with myself and expressing myself via music. And when you clear out negative energy, good things start to happen.

You recently dropped ‘Blood On My Hands’ with Smino. How did that track come together?
I was working in the studio with producers Sad Money and Govi, and it just came out of nowhere. It derives from a situation I was going through at that moment, where I was dating two girls at one time and loving both of them. The title came from the guilt of dating multiple women, it felt like I had blood on my hands.

The song almost feels like a sad, gloomy interpretation of club music. Is that what you were aiming for?
Absolutely. I think people are attracted to sad, upbeat music. Back in the 70s with like disco and shit, people went to clubs to relieve stress. They would let out all of their anger and feelings on the dancefloor. I always tell people that the genre of music I make can be described as “crying on the dancefloor”. 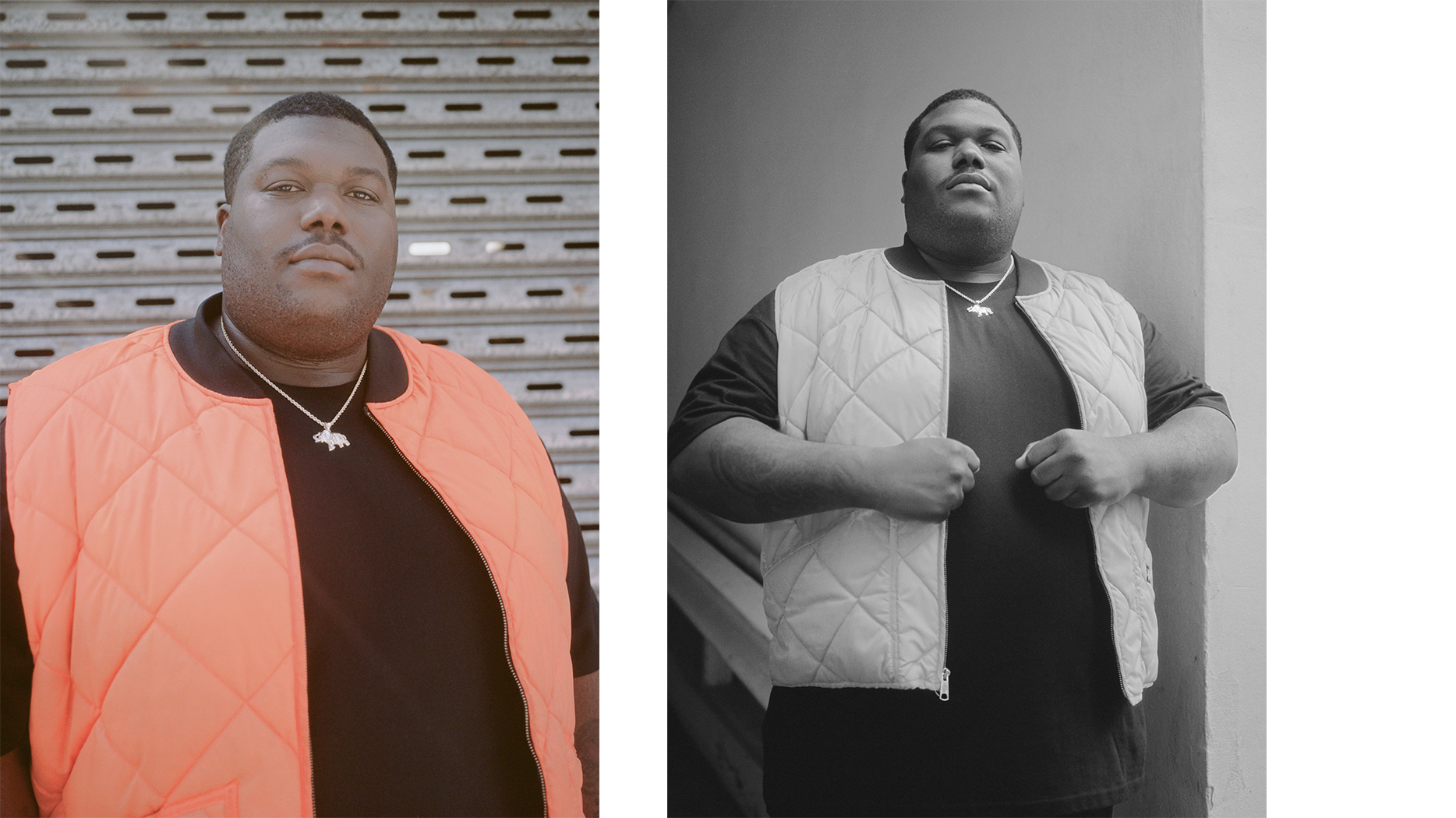 You’ve had a lot of success with your songwriting on the Billboard charts, especially with ‘I’m The One’ by DJ Khaled. What’s your guide to making a hit?
I think hits just come out of the abyss. No one can say what is a hit, and what isn’t a hit. There’s something in the water when it happens, I don’t know what it is. Like, look at ‘Old Town Road’ by Lil Nas X.

No one in the world guessed that would be a number one, but look at it now. You can put money behind a song and try and make it work, but what is meant to work will work.

Is there something you learned while writing for others that you’ve implemented in your own career as an artist?
Just being self-sufficient.There’s a lot of people that I’ve written for that aren’t happy with the person they are. Seeing that inspired me to stay away from anything that could make me someone I’m not proud to be. It made me stray away from drama, drugs, and other things that poison the mind.

You’ve written for a lot of artists, and tapped into different mind states while doing so. Do you think that’s helped with your ability to traverse through your emotions?
Absolutely. Emotions are like a creative team, my G. Anger is its own thing. Love is its own thing. Sadness is its own thing. When they come together, it’s something special. And when you’ve learned how to come to terms with them by learning from other people and the things they’ve experienced, it’s an unstoppable force. It’s the reason why music can be so honest. Like, look at someone like Ed Sheeran. The reason you get so much honest, emotional music from him is because he’s free and true to himself.

Creative team is a term I’d use to describe 88rising. How did you link up with them?
The relationship happened when I was invited to work with Rich Brian and Pharrell in L.A. That’s where I met Sean, the guy who runs 88rising, for the second time. I played him my song ‘Lately’, and he loved it and brought me onto the team. And during that process of connecting, I linked up with Red Bull Records. It became a big family sort of thing.

88rising is a unique label. They operate differently to major labels like Def Jam or Atlantic. What made you know they were the right choice?
What makes us different is that it seems like a bunch of friends making music together that happen to know what needs to go on in the backend. There’s no force to create. We really are friends. We really kick it when we’re in the same city.

Collectives seem to be making a return in hip-hop, with labels like Dreamville and groups like Beast Coast coming together as one force. Why do you think it’s important to present a unified front in music?
It goes back to like Public Enemy and Wu-Tang Clan where people had the mindset of strength in numbers. But I ain’t gonna’ lie, it feels like people have been copying the blueprint my G. They definitely saw the wave and decided to join in. But we encourage it. We encourage people to make art with their friends and make a brand out of their passions. There’s even a dope new collective coming out of L.A called Just Friends.

Speaking of L.A, there seems to be a new wave of artists out there with acts like you, Duckwrth, and Channel Tres. What caused this shift in sound?
Man, they’re my best friends. My childhood friends. It’s amazing to hear you say their names. What happened in L.A was that we had nobody to look up to. YG and Mustard were doing their thing, Nipsey was doing his thing, Dom Kennedy was doing his thing, but they weren’t the voice of the other kids in L.A. They weren’t representing the people that were different. But then you come to people like Channel Tres and Duckwrth who are making dance music and are making you feel things. We all made a pact a long time ago that we would make the things we wanted to make, and not what others wanted us to make.

I’ve talked to Channel before about how it’s hard to picture a life outside of the struggle you face growing up in the projects. How did you overcome this?
The same way Channel did man. We were sleeping on the floor of a garage together at one point. We struggled together for years. Living in a one bedroom apartment in Long Beach with like four or five people stacked up on top of each other. I think my mindset changed only recently because I never thought I’d leave L.A. But now, I’ve been all around the world. I couldn’t pinpoint where the shift in my thought process happened, but all I know is that things aren’t the same as they used to be.

Can you tell me about your new single?
Yeah man, it’s called ‘Simple Pleasures’. It’s a dance track, uptempo. It’s one of those songs that fall into the genre of crying on the dancefloor. It’s about unrequited love.

Do you think your next project will fall into the crying on the dancefloor category?
Nah man, the album is different. You’ll get a taste of Channel Tres, a taste of Duckwrth, a taste of everything.