No more FOMO, Brisbane music fans get their own boutique music festival

The legends over at Brown Bear Entertainment AKA BBE have announced their very own boutique music festival, the aptly named FOMO, in partnership with OCD and it will be bringing the inevitably stellar line-up to the lucky patrons of Brisbane in January. Often overlooked by many musical acts and festival dates, Brisbane will receive the exclusive treatment this time around, with FOMO offering one stage for all the acts, which will really prevent the fear of missing out we so often battle with at summer festivals.

While the official line-up won’t drop for a few days, our mates at BBE have been kind enough to offer a few hints, for you bright sparks:

– one of Australia’s favourite producers who loves choosing his own ending
– a duo that doesn’t point to the exits
– a producer and DJ in full technicolour
– a Brit that rocks Air Max 95s  :)
– $omeone everyone will be $uprised to see
– a singer/MC that picks cash over shitty friends
– an alliterating drum and bass duo
– a blonde, high-heeled triple threat and
– a favourite local DJ who be bringing the vibes and rays.

Hopefully that’s got you even more excited but if you’re still scratching your heads, don’t stress, we’ll bring you all the confirmed news this week. But if you’re at all familiar with BBE’s touring history, you know they’ll come up with the goods.

You can get updates directly from FOMO by signing up to their newsletter here, or keep an eye on the Facebook page. 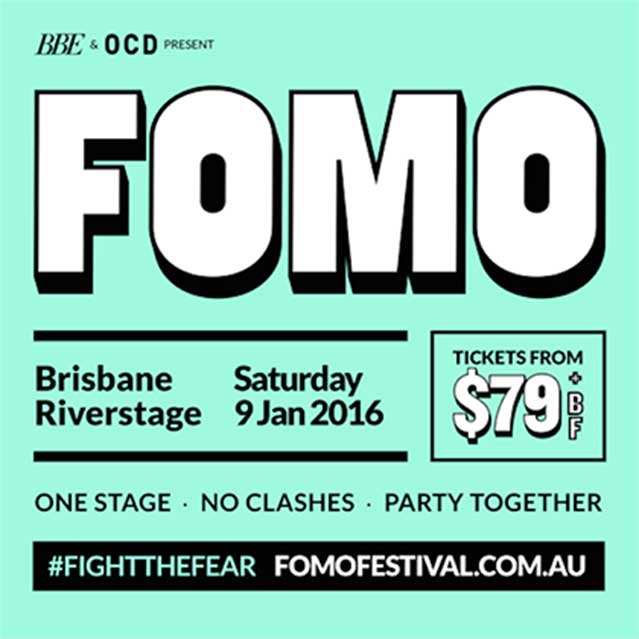