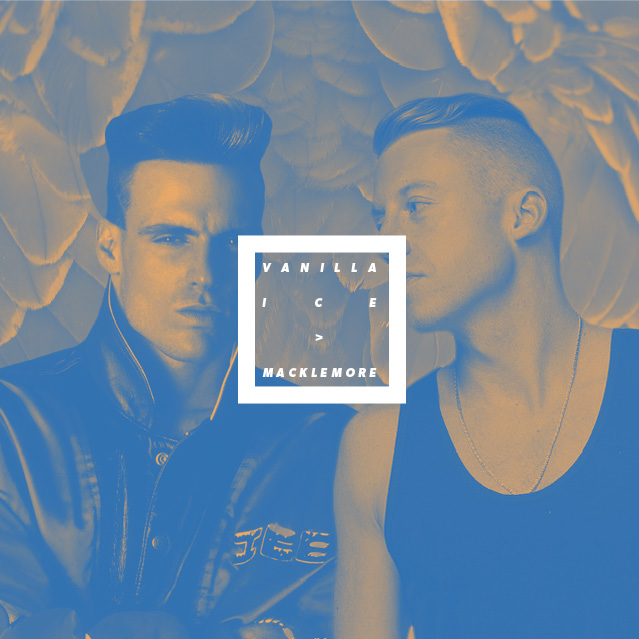 So the dynamic duo known as Macklemore and Ryan Lewis have just had their breakout smash Thrift Shop, aka the song that taught millions of little kids to drop the F-bomb, clock up over seven million digital sales. Follow ups Can’t Hold Us and Same Love have moved four million and a mill respectively and the album itself has surpassed platinum status. The obvious comparison to this is the eleven million copies of the To The Extreme LP that Vanilla Ice, aka Robbie Van Winkle, managed to shift back in 1991, when CDs actually meant something. Even though selling that many compact discs would have generated far more cash than digital sales, the Ice Man was signed to SBK Records and may have only been pocketing a buck or two per unit, depending on publishing arrangements. Nevertheless, he was able to buy a bunch of ugly-ass crap like that speedboat with a face painted onto it and numerous Kenny Powers–style jet skis. But I digress. As various apologist rap blogs have pointed out, Macklemore and Lewis, aka “Mac and Cheese”, are apparently sincere, earnest musicians as opposed to the alleged “culture vulture”/ “rap Elvis” label that was slapped on Mr. Van Winkle.

Looking back at Vanilla’s career, it turns out that he himself was apparently exploited by his record label, as he later claimed that they had pushed him into a more commercial direction for To The Extreme in an attempt to capitalise on the buzz from Ice, Ice Baby, which was the b-side to a single from his Ichiban Records debut, Hooked. They were also responsible for his fake autobiography (which claimed that Ice grew up in the “rough part of Miami” and went to school with Luke from 2 Live Crew) as well as his action figure doll, a cameo in the second Teenage Mutant Ninja Turtles film and, of course, the timeless cinematic masterpiece that is Cool As Ice with ya girl Naomi Campbell. There’s no way he can blame the label for dating Madonna for nine months, however, despite the fact that it was the only time he was able to share the “stage” (as it were) with an MC of Big Daddy Kane’s caliber.

Was Van Winkle really the epitome of evil, or just a guy with great hair trying looking for a good time? After years of touring, he inevitably fell into the trap of drug abuse and endless bad tattoos, became a Juggalo, returned to extreme sports, appeared on a bunch of reality shows such as Celebrity Bull Riding Challenge, Celebrity Boxing and Dancing On Ice, not to mention a couple of others where he developed a reputation for smashing up the sets when he was voted off. Ever the versatile performer, he even played Captain Hook in a pantomime performance of Peter Pan. Is there anything this guy can’t do?

Don’t think that ya boy has put down the mic either. He’s continued to drop musical jewels on the masses, with his most recent LP, W.T.F (Wisdom, Tenacity and Focus) covering everything from rap, rock, techno and country! Let us not forget that the late, great Ol’ Dirty Bastard also wanted to work with Ice, confessing to be his “greatest fan.” Who are we to question the words of the Wu-Tang’s true spiritual leader? Meanwhile, Macklemore is trying to appeal to former Linkin Park and Pink fans with his tales of emotional teen angst. To recap, here’s a rock solid list of reasons why Vanilla Ice will always be better than Macklemore: