Head to Head: Drake – Nothing Was The Same

Posted by Acclaim
Drake Features Nothing Was The Same 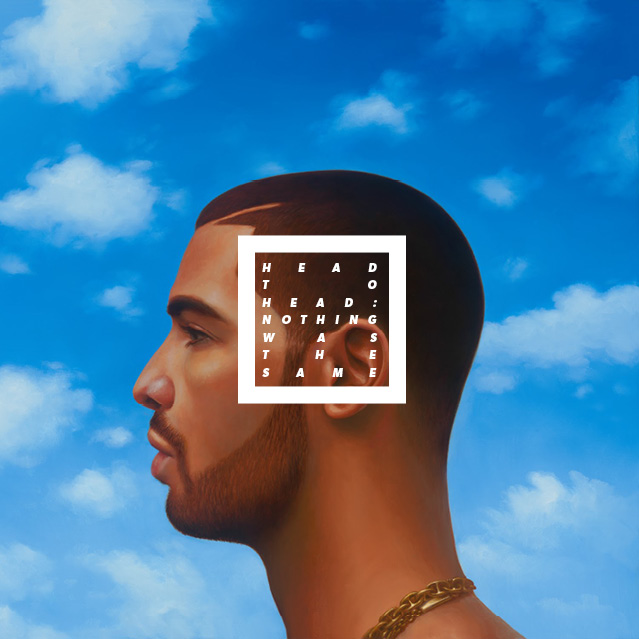 To describe Drake’s Nothing Was The Same as ‘hotly anticipated’ would be an understatement. We’ve known this for a while, but this was thrown into particularly sharp relief last week when the LP leaked and the internet groaned under the weight of Drake-talk. To describe the album as ‘divisive’ would also be selling it short, from its love-it-or-hate-it cover artwork to its love-it-or-hate-it content. Is the introspective, TMI world of Drake antithetical to everything that rap music is about? Or are the Drakes of the world destined to play a big role in the future of rap? Two writers sink their teeth into Nothing Was The Same; we put their responses head-to-head.

Hailing from the sexy plains of Ohesia, Dwayne Yates is a self-trained zodiac fortune teller, an aspiring DJ and a feisty bartender who follows in the footsteps of Matangi. One third of Dwayne’s life force depends on the availability of a wi-fi connection. His work can be found on Necole Bitchie, Complex and more, and he currently resides in Australia, contributing to ACCLAIM and enjoying what’s left of his early twenties. 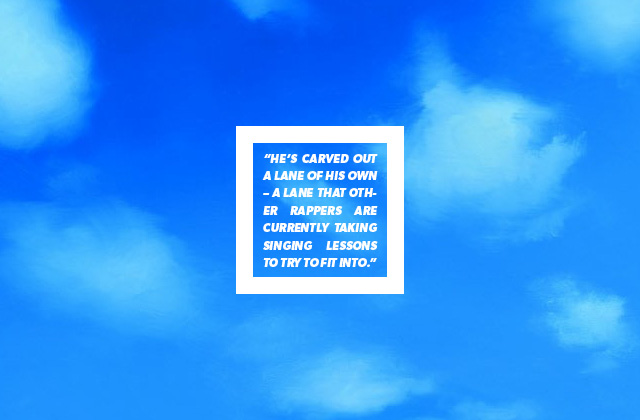 Nothing Was The Same will not be remembered as Drake’s greatest album. You won’t hear it and immediately love it or get it like, say, Thank Me Later. Drake albums may never meet the mass appeal attained on Thank Me Later, but that’s not because he can’t get to that level of hip-hop marketability. It’s because he chooses not to. He’s not here to please everyone. Like other heavyweight rappers like Yeezy and nu artistes like Kendrick, Aubrey Graham treats his LPs like art pieces. And in his case, it’s like a diary, a love letter, a warning message with melodies. He isn’t here to recreate a debut album. He’s here to prove a point, and this time it’s his machismo and legendary status.

NWTS is a hip-hop album. The most radio-friendly tracks were released before the whole thing sprung an epic leak. There’s the sci-fi march Started From The Bottom, Sampha-sampling Too Much and the Michael Jackson–inspired pop tune Hold On, We’re Going Home. But, on the flip side, we get brash ventures into trap like Worst Behavior with its broken-down-but-danceable beat courtesy Hudson Mohawke. Then there’s the time he borrowed Migos’ flow from Versace on The Language but came hard with the hook, as always, stating in sync with the beat drop that “She said she just wanna smoke and fuck. I said, ‘Girl, that’s all that we do’.” Which is almost better than the time he hit a Chief Keef Sosa flow before dropping the hook to Furthest Thing: “I just been drinkin’ on the low, mobbin’ on the low, fuckin’ on the low, smokin’ on the low, plottin’ on the low, schemin’ on the low…”

Then there’s Tuscan Leather, the six-minute intro where Drake sets the tone for the album. First of all, six-minute intro – that’s some rapper shit. And straight off rip, he says he could go an hour on this Noah ’40’ Shebib beat with its poignant Whitney Houston sample and two musical progressions – musical progressions being a reoccurring theme on NWTS. Interesting lines from this prologue to the album include Drake having flowers thrown at his feet like Prince Akeem in Coming To America and him stating that his Tom Ford tuscan leather sofa smells like a brick (of cocaine). I think this is the first time Drizzy’s mentioned bricks in his music whereas a rapper like Gucci Mane has several mix tapes full of songs dedicated to bricks. Is Drizzy getting gutter? Wait! His next line gives a shout-out to Ellen Degeneres, so we’re back on track.

The changes in progression are an interesting aspect of NWTS. On Tuscan Leather, Drake says “This is nothin’ for the radio, but they’ll still play it though / Cause it’s that new Drizzy Drake, that’s just the way it go / Heavy airplay all day with no chorus.” It makes you wonder if Drake wants to use his untouchable position in modern music to change how people make music, similar to what the Beatles did back in their day. So, props to 40, who produces and or mixes all Drake’s music. This album blends together organically. Wu-Tang Forever, an experimental love song the way only Drake could, with its minimal beat, piano loops and Wu-Tang sample, blends into Own It seamlessly via Drake’s constant proclamation, “It’s yours,” making Own It more of a Wu-Tang Forever Part 2. Then the next track, Worst Behaviour, gets linked in through an ODB reference, “Bitch, you better have my money when I come for it like ODB.” Drake is all about Wu-Tang on this album. But when he’s not making tough-guy statements, he’s back to women (shout out to Courtney from Hooters on Peachtree) and emotions, “She just wanna run over my feelings like she’s drinking and driving in an 18-wheeler,” but we love him for that.

Drake is a man who’s had sex with Rihanna, released his own posthumous Aaliyah single featuring himself, had beef with Common and Chris Brown and sips his lean from the his very own Grammy. But he’s also a man who constantly has to defend his own masculinity. His penchant for writing personal lyrics, no matter how honest and butthurt they sound, leaves him open for constant ridicule. So I feel like NWTS is his answer to that. Where Take Care often saw Drake contemplating the trials of fame, NWTS sees him embracing his success and setting himself up to be one of the greatest ever.

The album’s standard-edition outro, Paris Morton Music 2, serves as Drizzy’s lyrical coming of age during which he snatches the crown from Jay-Z after Hova’s mediocre performance on Pound Cake is finished. “Look, fuck all that ‘Happy to be here’ shit that y’all want me on / I’m the big homie, they still be tryna lil bro me, dog / Like I should fall in line, like I should alert niggas / When I’m ’bout to drop something crazy and not say I’m the greatest of my generation.” Drake is no longer who he was on Thank Me Later or even Take Care. He’s put himself in the Hov lane, even though he already carved out a lane of his own – a lane that other rappers are currently taking singing lessons to try to fit into. Welcome to Drizzy 2.0. ☠

ROBBIE ETTELSON WAS NOT IMPRESSED

Robbie Ettelson is the founder of Unkut (aka “Hip-Hop’s Greatest Website” according to Internets Celebrity Dallas Penn) and president of the Conservative Rap Coalition, an organisation that strives to preserve the values of non-progressive, abrasive rap music in the face of an increasingly moist musical landscape. Lately I’ve been causing some headaches for the editorial staff around here. What with having a recent column “put on ice” so as not to ruffle feathers and the subsequent replacement piece requiring heavy sanitising on account of being “insensitive”. My punishment, it seems, was to be assigned to review the latest magnum opus from Aubrey Graham…

Things start off in an appropriately troll-like fashion, as is the wont of current rapper dudes, with Drake pretending that he’s going to hit us with a decent amount of rappity rap shit. On the positive side, the beat changes three times over the six-minute intro, which I always appreciate since I bore easily, but I’ve been around long enough not to fall for this classic bait-and-switch routine. Sure enough, the next track is the “Furthest Thing” from hardcore rap, conjuring visions of some kind of interpretive dance performance that might be poppin’ off in the Greenwich Village, while our hero boasts of all the things he does “on the low”, which I believe is not a million miles away from the term “down low brother”, often used to describe dudes who enjoy clandestine sexual liaisons in public toilets. Once again the beat flips into something less moist at the halfway mark, as if Drake began to feel guilty for delivering such a pussy-willow song and tried to make amends. He failed.

Started From The Bottom then swoops down to salvage proceedings, and it’s easily the best thing this Keith Sweat wannabe is ever going to deliver, based on the simple fact that the “cha-cha” percussion reminds me of old Hurby “Luv Bug” Azor and Slick Rick records. Plus I heard this song numerous times while astral travelling on free Henny. From there, the next two songs seem to centre around T La Rock’s timeless declaration that “It’s Yours”, but only because the Wu once had a song called It’s Yourz, so we hear the phrase uttered throughout Wu-Tang Forever and Own It, two pieces of wistful navel-gazing that are to rap music what the trance genre is to dance music. If Drake actually heard the T La Rock and Jazzy Jay original, he’d likely be terrified by all the loud, scary sounds and big words and cry himself to sleep.

You may want to light some vanilla-scented candles and fill-up the tub with lavender bubble bath and your favourite loofa for exfoliation purposes for the rest of the platter, as From Time is moister than Mom’s sponge cake. Hold On, We’re Going Home is specially designed for you to sing along to in the bathroom mirror while dancing like an idiot, using your hairbrush as the microphone with your towel wrapped around your head and waiting for your nail polish to dry. If they fuck around and remake that Fame film, this is a shoo-in for the theme song. Flashdance Rap at it’s finest. Meanwhile, Connect is the perfect soundtrack to curl up to in the fetal position in the corner while rocking back and forth, possibly after a good exfoliating scrub. The Language is simply the most homosexual song about fucking women ever created.

Too Much reaches new Emo Rap heights thought previously impossible, and sounds like the result of a butterfly riding a unicorn on top of a rainbow while crying tears of joy and writing a new journal entry in a sparkly diary. Just when you’re near ready to burst from all the feelings washing over you like some kind of technicolour waterfall, old man Hova shuffles into the room and mumbles something on Pound Cake / Paris Morton Music 2 to bring proceedings back to earth on some real buzz-kill shit, while everyone’s favourite hockey stick–waving, Dada shorts–sporting Canadian unleashes some weird spoken-word style confessional over an appropriately flamboyant piano extravaganza. And then it’s over. There there are two bonus iTunes songs but I’ve suffered enough at this point. I feel like I’ve been violated in some strange way just by being forced to absorb so many unwanted feelings and emotions. Perhaps Drake has finally achieved what Madonna attempted back when she first jumped on Guy Ritchie’s jock, and has let the world know What It Feels Like For A Girl. ☠