No Country for Old (Rap) Men: Rap Genius Should Be Renamed Rap Dummy 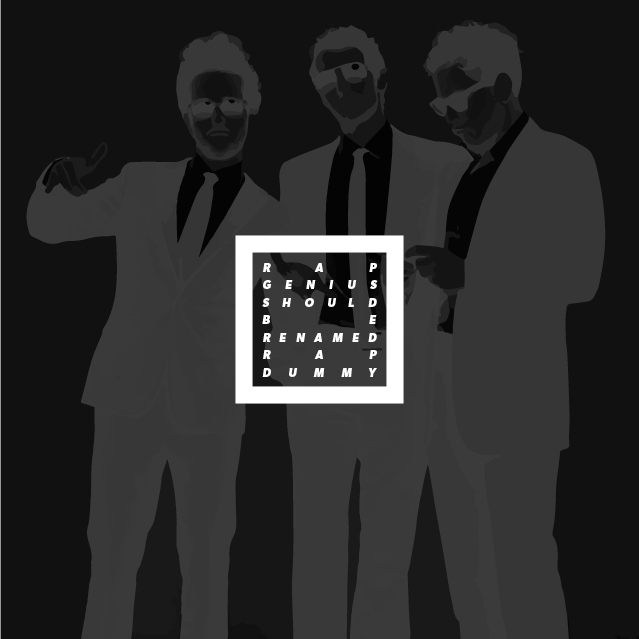 In the early days of Rap Blogs, there were entertaining etherings taking a place on a pretty regular basis, as bloggers called-out rappers and media outlets with hilarious results. Some of the finest work along these lines was carried out by Byron Crawford, who many mistakenly labeled as a ‘shock blogger’. Following some excellent work such as the ‘Ban Kanye From The Grammys’ campaign, upsetting Bun B from UGK and pioneering work introducing terms such as ‘Weed Carrier’ and ‘Tall Israeli’ into the rap lexicon, Bol was recruited by XXLmag.com to head their roster of bloggers in 2006 (?), which at various stages also included Rap Blog mainstays such as Noz (Cocaine Blunts), eskay (Nah Right) and Billy Sunday (Dallas Penn).

Forward to 2012, and a rap lyrics website which allows users to explain the meaning of specific lines to lazy-ass music fans (who prefer to minimize thinking for themselves whenever possible) makes headlines when it receives a $15 million investment. While there are some grumblings that the majority of older material was literally lifted directly from the long-established Online Hip-Hop Lyrics Archive, no one was particularly concerned, other than fact that the three founders of the service were portrayed as bratty fuckybergs when interviewed.

Last week, a contributor to the site forwarded Bol some screen caps of what goes down in the private chat-rooms of the site, which are reserved for a select group, which revealed some disturbing jokes about slavery and a barrage of racist comments from staff. When the story was picked up by a couple of larger Tech Blogs, the official response was that it was the work of hackers. This was almost immediately contradicted by several other users publicly posting that the comments were in fact from actual Rap Genius editors, but countered that “they are both black” and were “just kidding around”. Things escalated when one of the founders then spat the dummy in the same chat room, declaring that he wanted to kill Byron and, more bizarrely, that he was a disgrace to Palestine.

Byron then revealed that the major backer of the firm was a major contributor to the Mitt Romney electorial campaign, which he reasoned meant that supporting Rap Genius meant that you were supporting the Republican Party. Meanwhile, Rafi Kam revealed that in his earlier meetings with the crew they had basically been a bunch of clueless douchebags who new virtually nothing about hip-hop music and seemed to specialize in making offensive jokes about everybody under the sun.

When I questioned them publicly via Twitter, their responses ranged from “get a fucking job” and “you’re an irrelevant 90’s blogger”. Mahbod also appeared to justify his right to make racial jokes because “white kids used to call me sandnigger”, before proceeding to call Dallas Penn an “over-stuffed Oreo” and “a disgrace to bloggers”. When he figured out that Dallas was pals with actual rappers like Sean Price, who had recently visited their office, they suddenly back-peddled and declared their respect for Mr. Penn, despite previously mistaken him for a rapper when they first met.

Since I told them I was a pale face who lived in my “mom’s basement”, I was informed that I was “still a TURD”, which caused me significant emotional distress to the point that I may never be able to leave my mother’s basement ever again, nor create my own Rap Internet ponzi scheme with the sole purpose to “bag bitties” like the uber-cool Rap Genius mack daddies. Stay tuned for more shit’s ‘n giggles, kids. This is like shooting fish in a barrel.