Brisbane producer cln has been around for a minute, remixing the likes of Japanese Wallpaper and Odesza while slowly refining his production skills. Juggling a burgeoning music career while maintaining grades in a law degree isn’t something that I would recommend for the passionless or unsure and Callan Alexander’s quiet determination shines through in everything he does. That tenacity to create while remaining grounded in reality feels stapled to the underside of every hazy, hesitant synth stab on his latest single ‘Left Behind’. To celebrate the upcoming July release of his EP Found, cln is going on his debut national tour. Find out more about that here and check out what he had to sat when we sat down for some Small Talk.

By day I… sleep, or go to uni once every couple of weeks if I feel up to it.

My favourite TV show is… David Attenborough documentaries. Not even kidding, nature is crazy.

The last movie I watched was… I honestly can’t remember; probably something super average/forgettable. I think it might have been the new Avengers movie.

The first album I ever bought was… The first I can remember purchasing with my own money was probably Demon Days by Gorillaz. Still arguably my favourite album of all time.

The last was… I bought the new A$AP Rocky album, and the new Mura Masa EP pretty recently. I haven’t fully gotten into the A$AP album yet, I think it needs a few listens. The Mura Masa album is ridiculous though. Go buy it right now if you haven’t already.

If I wasn’t making music I would probably be… at uni, which is kinda what I’m doing anyway though.  I’m balancing music and a law degree at the moment, and I plan on adding a bachelor of science to my studies too starting next year. Balancing things can be really tough at times, I’m pretty busy. I think if I wasn’t making music my grades would be a lot better. [Laughs.]

I’m addicted to… video games and Reddit. They take up way too much of my time.

The best thing about touring is… trying different food! So many good new places to try.

The worst thing is… having to pay for flights, and then not getting paid by promoters for 4 months.

My perfect gig would involve… people there for the music, not just the alcohol! When you’re an up and coming artist, you often have to play shows where no-one in the room knows who you are. Can be a bit painful when people are requesting house and top40 when you are trying to play your live set. That’s okay though, I’m super thankful that I’ve been able to play some great shows so far.

The first gig I went to was… my dad took me to see Foreigner when I was a little boy. Didn’t really know who they were or what was going on, but it was great.

The most important thing on my rider is.. a table! Or some sort of flat surface. I’ve had a show where I’ve had to play on wobbly chairs strapped together because there were no tables at the venue.

My hangover cure is… don’t drink too much! Prevention is the best cure. I’m fairly unusual in that drinking isn’t really my thing; I’m more of a sit at home and make music kind of person.

People always ask me… how to say cln. I’ve heard clean; cullun, cuhlin. You can say it however you like! I usually just say the letters though (see-el-en).

If I could only eat one thing for every meal, it would be… that’s a really tricky one. I’d love to say like burgers or something, but then I’d get really fat. Probably burritos I guess, rice is kinda healthy right?

My computer’s wallpaper is… this image repeated over and over for some reason. Not sure why. 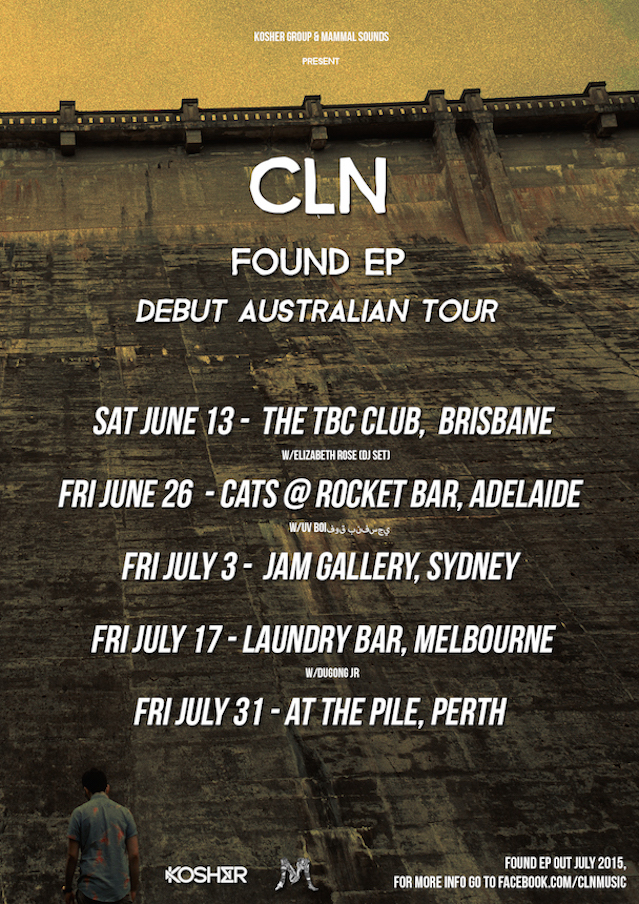