Triple One: Creating in Uncertainty

Celebrating the release of their new mixtape A Dangerous Method Vol.1, Marty Bugatti and Billy Gunns talk us through facing their demons, reinventing their formula half a decade into the game.

As soon as the synths come in on ‘GUNSHOW’, the opening track from Triple One’s latest mixtape A Dangerous Method Vol.1, it sets the tone for the Sydney quartet’s most unique project yet. Obi’s voice still bellows, Dijon still croons in the form of catchy hooks, Marty still brings bars in barrages, and Billy Gunns continues to be a master in the art of beat-smithing. But this time around, the sounds are darker, more versatile, and surprising at every single turn.

“We constantly change because we have a need to be original in everything we do” Marty tells me over Zoom, as he and Billy join me over a duration of 20 minutes. This urge to stand out is particularly special considering their position as 5-year veterans in the Australian hip-hop scene, with a formula that’s been proven to work. But complacency isn’t in the Triple One ethos, as displayed throughout this new mixtape’s 10 tracks, which features collaborations with the likes of 18YOMAN and Lucianblomkamp. The group explores the sounds of DnB, hip-hop, R&B, emo, and more, with every lyric reading like a diary entry that bears the member’s individual journeys of self-discovery. Recorded sporadically over the last 2 years, the mixtape tells the story of an evolving Triple One, who are their most revealing in terms of growth and taking more risks than ever in terms of sound.

Throughout our interview, Marty and Billy talk me through facing their demons, reinventing their formula, and their position as veterans half a decade into the game.

Congratulations on the new project. How are you guys feeling?
Marty: Everything feels good. It’s been a long time in the making. This project is basically just a collection of songs we made throughout lockdown when we weren’t able to play shows.

I know y’all like to go on writing trips when creating. Was it the same for this project, even with the lockdowns?
Marty: Yeah, we went to places like Wisemans Ferry and Talong. We like to go pretty much anywhere that’s over an hour away from Sydney, so we can really disconnect, with rolling hills, horses, and stuff like that. We like to be trapped with nothing else to do but make music.

Billy: We always try and get a property that doesn’t have neighbouring properties, because you don’t want to annoy the shit out of people at 2 AM while making music.

I read a quote from you Marty where you talked about the uncertainty in life and music, with that becoming a big theme across this project. How do you turn uncertainty into something definitive such as a mixtape?
Marty: I feel like uncertainty is just a part of life, and it’s always going to be there. You just have to address it and roll with the punches, because you can never overcome it.

Billy: I think we always make music in an uncertain way. We really don’t have massive goals or massive amounts of direction for each song. When all four of us are in a room together, there’s certainty within the uncertainty.

I feel like how we deal with uncertainty undoubtedly transforms who we are as people. How do you think you’ve changed over these 2 years of uncertainty?
Billy: We’re just getting used to it, and learning how to live with it. Rescheduling tours and stuff like that has been jading, but also helped drive us more. Everybody’s been in the same boat within this industry, so it just depends on whether you take it over, or let it take over you.

I recently spoke to A.GIRL about the power of owning your anxiety. Do you think there’s strength in owning uncertainty?
Marty: I feel like, at times, we’ve been able to take advantage of it, and push forward. But other times, it does get the best of you. I think the best thing to do is to try and stay positive, even when it starts to get difficult.

When I interviewed you guys around the release of Panic Force, you talked about how the efficiency of your workflow had become more refined. With this project sounding like nothing else you’ve ever done, was there any sort of un-refining process used to approach these new styles?
Billy: I’d say it just comes down to the time length in which this project was made. There are songs on here that we made 2 years ago, and there are songs here we made at the end of 2021. So it’s not a project that’s been created in a cohesive manner.

Marty: I think that’s the only way we really unrefined here. We’ve started collaborating with different producers and mixing engineers as well, who just keep getting better and younger. So that’s an exciting new part of the process.

The title of the project references the work of Sigmund Freud, who has an interesting quote where he says “From error to error, one discovers the entire truth.” What are some truths you discovered creating A Dangerous Method Vol.1?
Marty: From a writing perspective, it’s a project based on growth and self-discovery. It touches on negative experiences and being able to grow from mistakes you’ve made in the past. It’s not overwhelming in the sense of the negative things we touch on, but it’s like what you said with A.GIRL, where we are integrating our demons into everyday life, so we can face them head-on.

Marty, you’ve described Triple One recording sessions as a safe space for sharing emotions in the past. With the writing on this project approaching these darker topics, has the safety changed in any way?
Marty: Triple One sessions are always going to be safe to an extent, but there are days when you don’t feel as confident. But I think it more often comes from the personal experiences one of us is having, as opposed to external forces such as the room we’re in.

Billy, how does the chaos of life play a part in the production side of things? Do you think it changes the sounds of styles you approach when creating?
Billy: Absolutely. I think I’ve always produced in a way that’s reflective of how I’m feeling at the time. Like I said before, we don’t necessarily plan ahead in terms of what we’re going to make. So I think the feelings of each of us really determine where a song goes.

You guys have been staples in the scene for over half-a-decade now, which makes you veterans in the fast-moving times of today’s music industry. How do you avoid the comfort of complacency, and continue to reinvent your formula for every project?
Marty: We constantly change because we have a need to be original in everything we do. We don’t like our sound getting old. Being veterans in the scene now, we have to do it as well, just so we can compete, or create our own lanes so we don’t really have to compete. When people want a Triple One-type song, they have to come to Triple One. They can’t go to a playlist on Spotify, they have to come right to the source.

You’ve also managed to release all your music via Triple One Records over the last 5 years. In an age where there’s more corporate interest in Australian rap music than ever, how do you continue to maneuver as independent artists?
Marty: I think that’s one of the most important things that set us apart early. We researched everything we do and taught ourselves via Youtube and Google. So when it came to the point where we assembled our team of management and whatnot, we knew who and what was going to be right for us, so we could stay independent to an extent. I think teaching yourself is the best advice I could give to upcoming artists, so you don’t get ripped off in the future.

Billy: Major labels coming in and signing young artists who are just popping off to 360 deals is definitely a common thing, and at those young ages, you’re eyes pop out at any kind of interest or shine, so you definitely have to be wary and educated on the snakes in the grass when it comes to this industry.

Billy, as someone who is successful both business-wise and creatively, what advice would you give to upcoming producers who are new to the industry?
Billy: I can’t speak for everyone, but I think a good way to do things is to work with a specific someone, as opposed to chucking a whole bunch of stuff everywhere. I think working with one artist over a long period, and developing a sound with them is a really helpful thing. Because if people want to sound like that specific artist, they really kind of just want the beats that are behind them. Also, don’t get jaded about working with other producers. There’s definitely a big DIY thing about production, but there’s always someone who is better at something than you. It’s no coincidence that these number one records have 15+ producers on them, so just always be open.

Lastly, what’s on the horizon for 2022?
Marty: We’re planning on dropping A Dangerous Method Vol.2  in the middle of this year, so that’s our immediate next step. But of course, we’re touring off the back of this one, and hopefully, no COVID or weather stuff prevents any of the upcoming shows from happening. After all of this, we’re back to the drawing board. There’s no stopping. 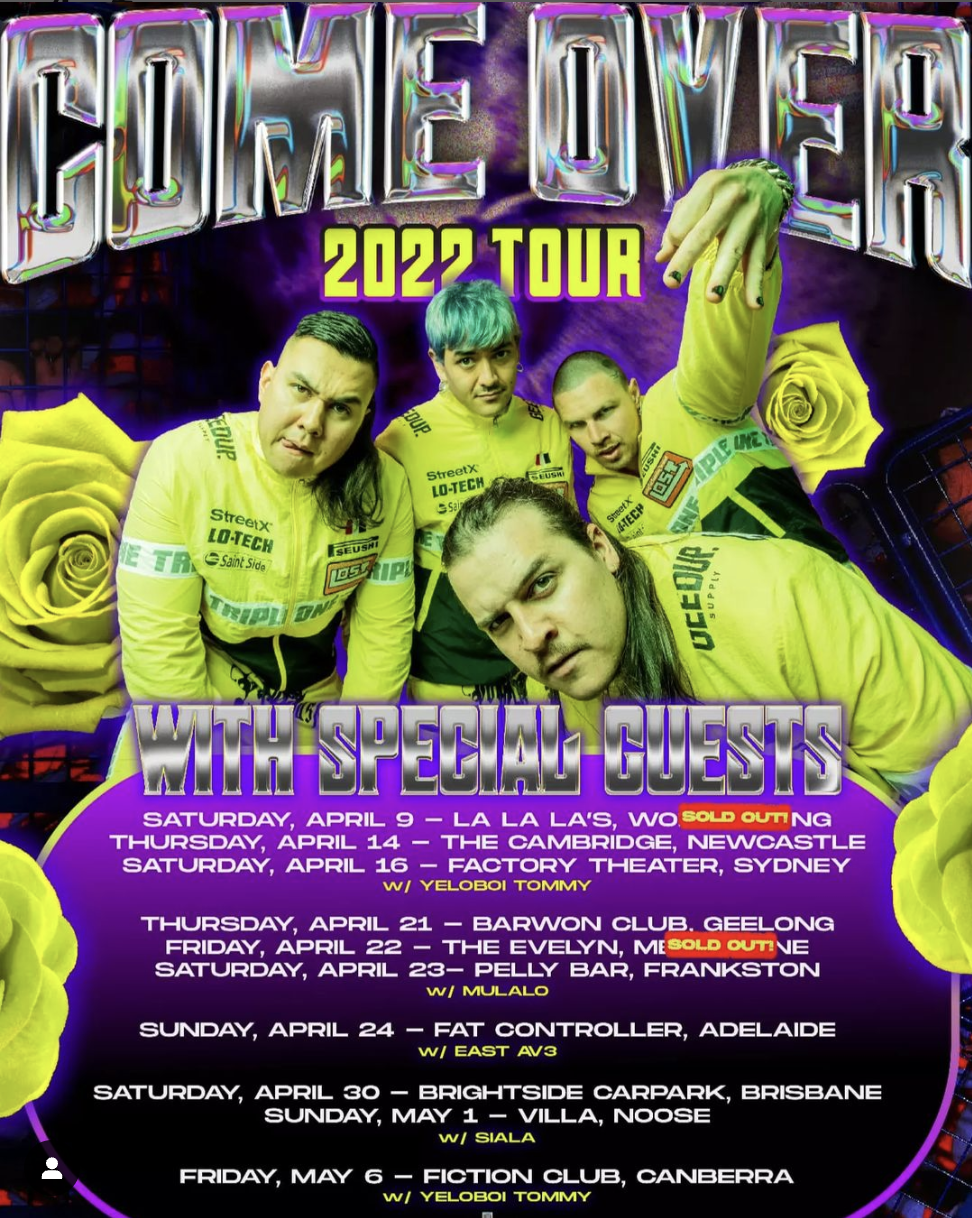 Follow Triple One here for more and stream the new project  A Dangerous Method Vol.1 here.