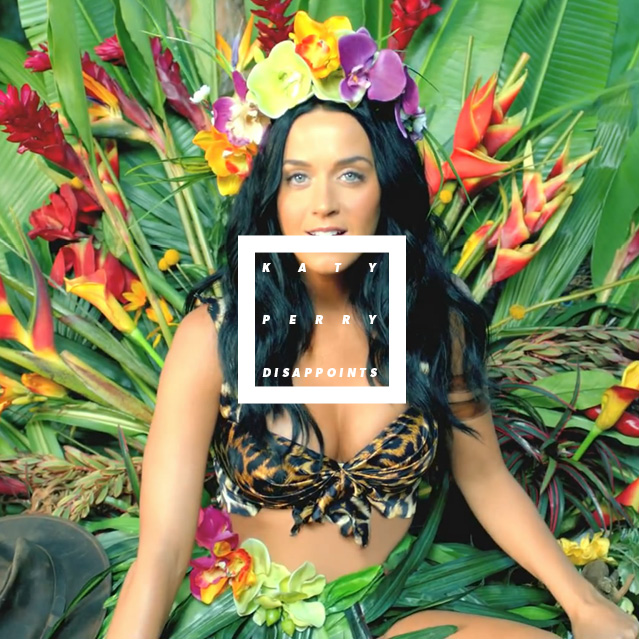 So the very luscious Katy Perry has a song out that is quite obviously directed at her spindly legged ex-husband, Russell Brand. I hate to sound like a wanker but I’m not usually prone to listening to commercial radio in all its inane glory but I have been living in the suburbs for the last month in my home town of Cape Town, and the place is riddled with the stuff. Wherever you go, a bit of Katy and Gaga will be there. Whether it’s in the car, on the telly at the shops, the tooth-rotting sweetness of it all is everywhere. Oh how I miss you Melbourne with your hipsters and your expensive coffee and your loving of new bands that are so new they haven’t even been born yet. Why are these my options?

Anyway, this song Roar by Ms Perry is basically the musical equivalent of changing your hair, dropping some kilograms and rubbing your ex’s face in all your success and newfound hotness. With lyrics like “You held me down, but I got up (Hey!) / Already brushing off the dust,’ and, not to mention “I got the eye of the tiger, a fighter, dancing through the fire / ‘cause I am a champion and you’re gonna hear me roar,” it really positions Katy as some kind of pop-culture philosopher. Perhaps her next song will be a spin on ‘If a wood chuck would chuck wood’? I know her fans are pretty young, but come on! Give the kids some credit and allow them some lyrics that they actually need to think about.

I watched the Katy Perry movie just like every other chick. And I came out of it just like every other chick in that I ended up with a lingering distaste for her music but a real appreciation for her ‘as a person’. There is no doubt that Russell Brand is a bit of a fame-hungry lothario with a huge ego and sexual appetite. And, like most people who consider themselves to be ‘enlightened’, he is a bit of a twat. But have you ever read the man’s writing? He makes Oscar Wilde look like Carrie Bradshaw! He fiddles and manipulates the English language in such a way that each chapter of his is like 50 Katy Perry movies. He really is a wizard with words.

I reckon the only way Katy’s little ditty is gonna cut deep into Russell’s conscience is that he is not going to be able to get away from it. It is literally being played everywhere. All the time. Every minute and on every conceivable platform from the telly to the radio to the internet. It is going to follow him around and make him squirm for one reason and one reason only: it is grating. How she thought her little nursery rhyme was going leave ol’ clever clogs, sharp-tongued Brand sitting in the corner thinking about what he has done is beyond me. She does look absolutely smoking in the video clip though, so that’s a good thing.

Now the last time I gave Katy Pezza a bit of a hiding on the Twits I got stoned to death by her Katycats who rushed to her aid like the yappy poodle guard dogs that they are. Now listen here you crazy cretins, I ain’t knocking the broad – I just reckon that if she submitted this song at her final recital she would have gotten a ‘must try harder’ on her school report. Come now Katy, less of the ‘baa baa black sheep’ and more depth, if you please. Even your mate Rihanna can whip out the tongue-in-cheek. But then, what do I know when it comes to pop music? Not much. They have a formula and it works I s’pose. But I’m gunning for the chick, and I was really hoping she was gonna come back with some meat and potatoes instead of her usual diet of cotton candy. Oh well – at least there are cute animals in the video.