I’m holding out for the day that Action B hosts Saturday Night Live. Now Drake served as a pallet cleanser for the general public’s putative rap notions, Bronsoliño could come through with skits about scouting for hookers in Queens or maybe do a Seinfeld skit where he would play a blazed Newman. Better yet, he could just have his own day time TV show where chef’s come to vent work-related issues (really though, chefs are messed up people). Fights would ensue but because he “looks like the motherfuckin’ Body Guard,” he’d resolve the violence himself by throwing those with the weakest arguments back into the crowd.

Oh, and here’s part two of Adventure Time With Action Bronson – New Zealand Part 2 where he bull-in-a-china-shops a crowd of 50,000 people and eats sandwiches looking cute. 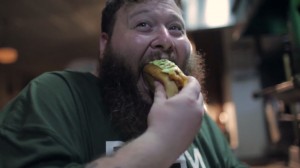