We sat down with the Compton rapper to talk Snoop Dogg, street parties, and Goku—the big homie.

When I arrive at the Melbourne studio where I’m supposed to meet Buddy, the Compton rapper is rolling a Fronto Leaf over an older copy of Acclaim—the one with Vince Staples on the cover. He’d arrived a few hours earlier for the photoshoot, but was back in his own clothes now, watching Worldstar videos with his friends. The audio blared over a bluetooth speaker and his crew offered a running commentary over the top of every clip.

He’s just arrived in Australia for a small run of shows with RL Grime and Baauer, to promote his debut album Harlan & Alondra. The record is an ode to life in Los Angeles that sees Buddy go from spitting hard bars on the ASAP Ferg backed ‘Black’ to tapping into his soulful side for lead single ‘Trouble On Central’. It’s a solid body of work with big names like Snoop Dogg, Ty Dolla $ign and Khalid joining the versatile musician for his debut. 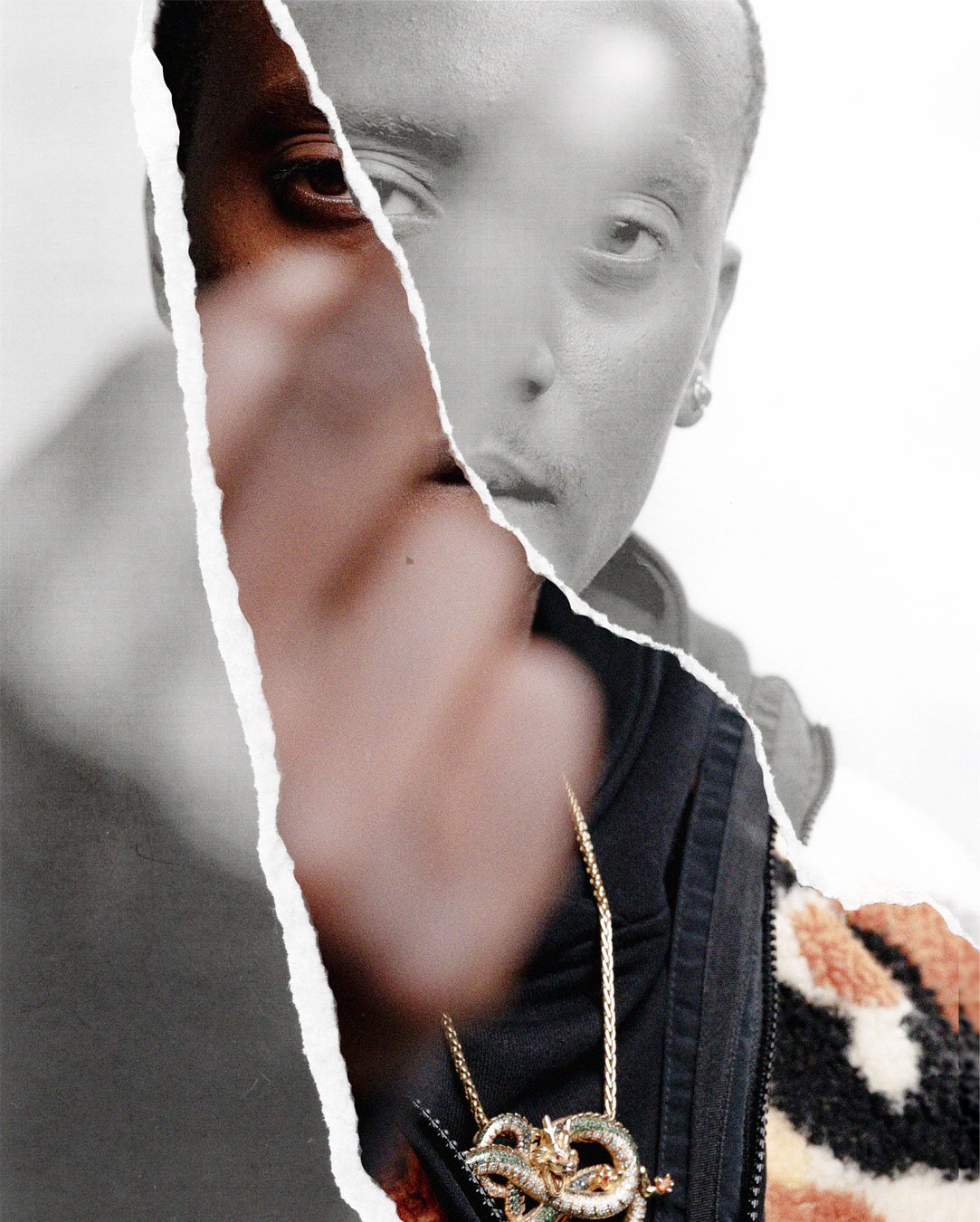 In a lull between Worldstar videos, I introduce myself. The 25 year old is boisterous and friendly—you know, he lives up to the name. “What’s up man, how you doin’? Cool if I roll this real quick?” He snaps a quick photo of the magazine to send Vince, and we get to talking.

Welcome to Australia Buddy, fresh off that long haul flight! How you feeling?
Thanks man! I’m chillin’, I was reading the Gucci Mane book on the plane—it’s crazy! It talks about his Grandad being the original Gucci Man, and how ‘Mane’ came about. Gucci Mane is a legend.

I’ve read that book, it’s amazing. They could make a movie from the first chapter alone.
It’s gotta be a movie! It’s crazy.

Tee from PERKS AND MINI, jacket from STRATEAS CARLUCCI.

I wanted to talk about the beginning of your career—you’ve been performing your whole life.
Yeah, I grew up in church in Compton. I was in church choir, usher board, all the church activities—my parents made sure I did a bunch of stuff outside of the streets to keep me off the streets. I was always involved in public speaking too you know, I was always in front of an audience. [Performing] was already what I’d been doing, there wasn’t even a second thought there.

And you did some acting too?
Acting kind of came a little later, when I joined the Amazing Grace Conservatory. We learned how to act, sing and dance there, and we put on theatre productions like Oliver with a Twist and The Wiz—shit like that.

Is acting something you’re still interested in?
Yeah, I’ve actually been going to auditions but I’m not the best actor right now, I think I need to take some classes or something. 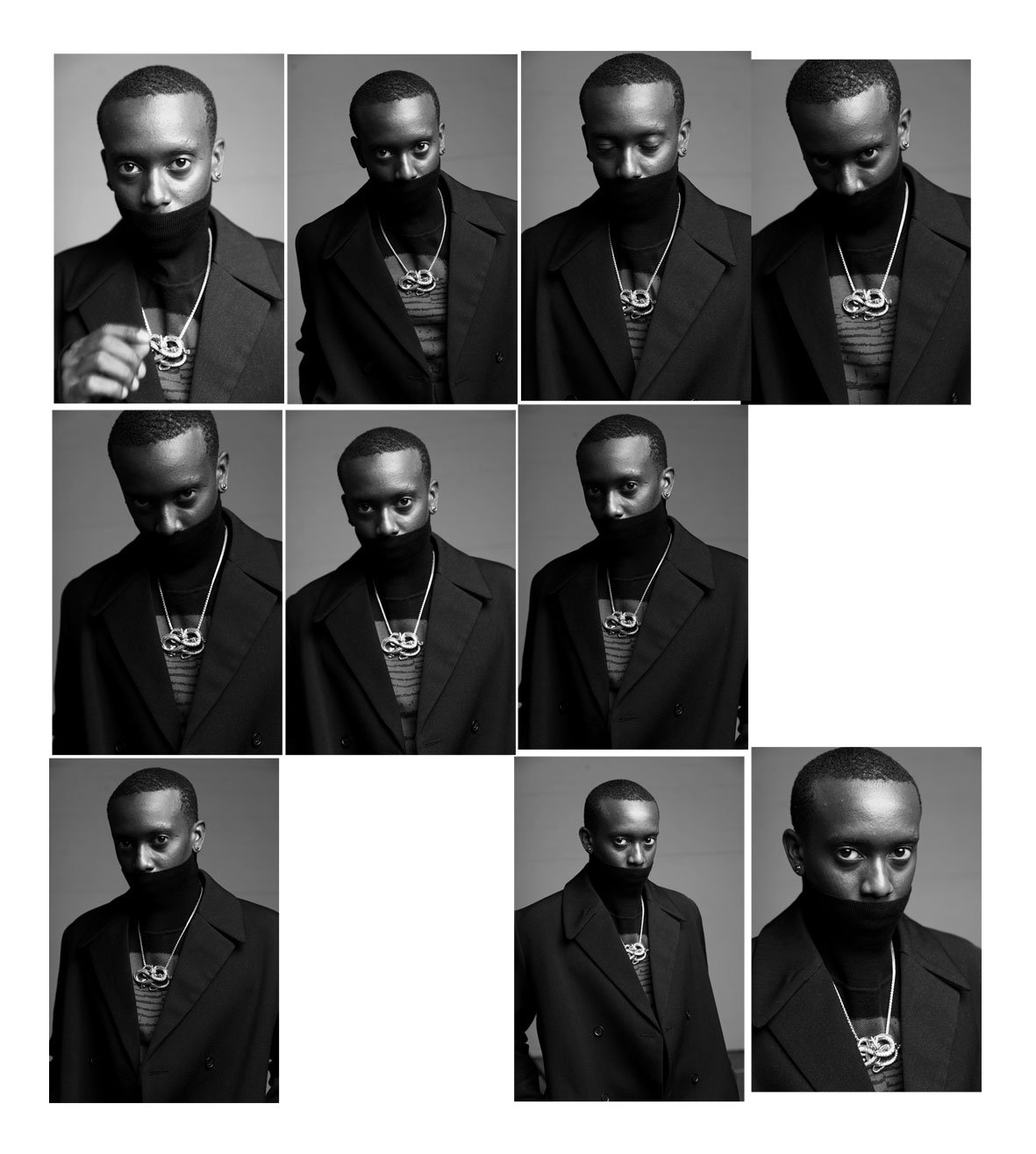 Jumper and coat from STRATEAS CARLUCCI.

What kind of films do you want to be doing?
Man, I’m gonna need all of them. I’m tryna make a Scorsese, I need a Wes Anderson, I want a Spielberg and a Tarantino. I’m trying to fuck with the legends.

It’s funny you say Tarantino, when I first heard your record some of it reminded me of his movie Jackie Brown, have you seen it?
Oh yeah! I have seen that, Samuel L. had the slick back! Oh my god, yeah I remember that movie.

Parts of your record have an old soulful feeling—like that film. Are you consciously referencing to the past?
I always hung out with and looked up to the old niggas, in the church and the streets. I just feel like they’ve been through it already. You get the best advice from the OGs… well, sometimes, not all the time. Sometimes OGs is not with it. 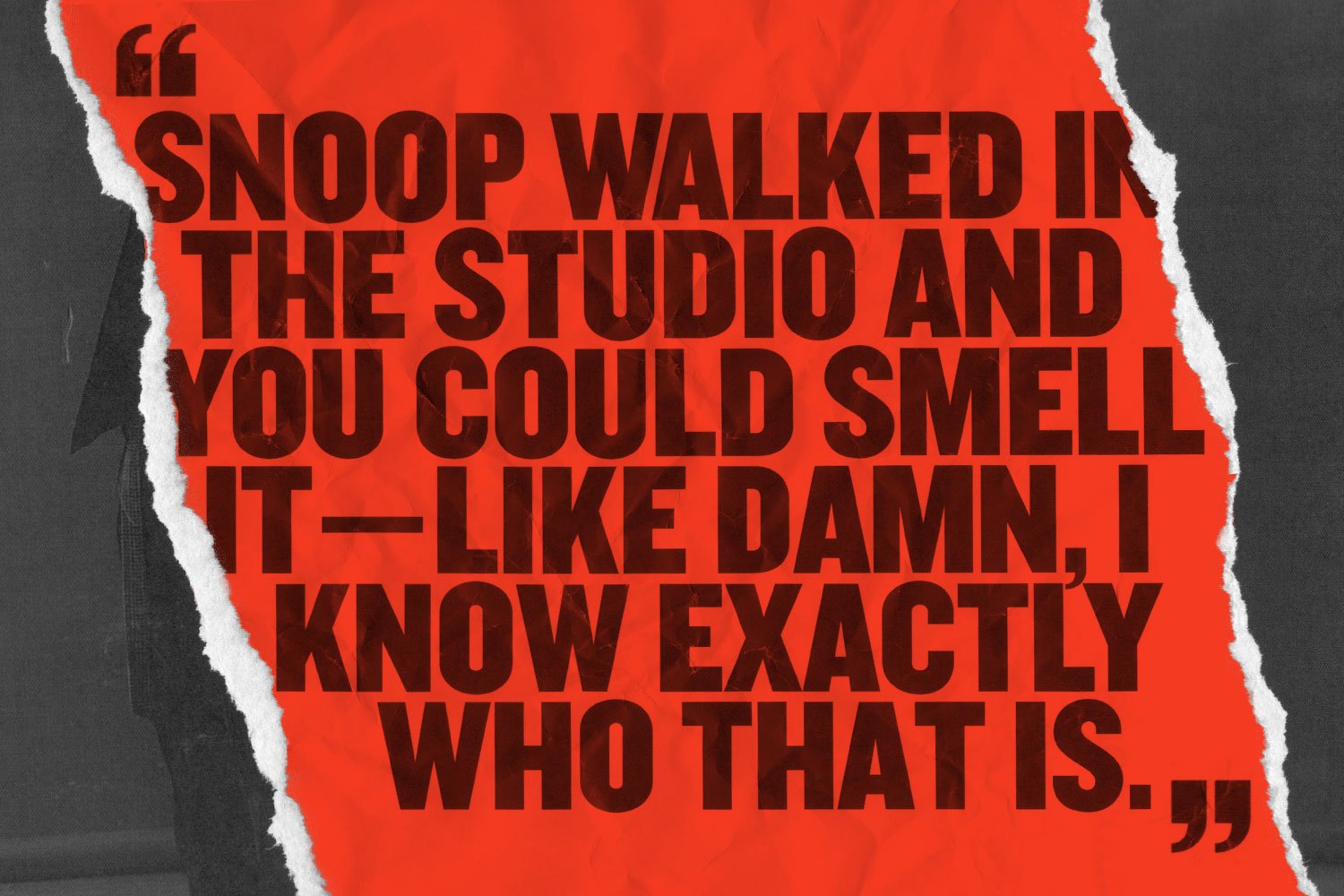 Did hanging out with those older people in the church shape your taste as a kid?
I’d say it was people in church, family and friends, stuff on the radio, and songs I’d hear at block parties. Growing up in in LA it was just all around: the gangster rap, blues, soul, R&B, and stuff from out of town because everyone comes to LA anyway.

Snoop Dogg features on your record—that’s a pretty huge LA icon. Did you get to work in the studio with him?
I wasn’t in the studio when he recorded that verse, but the first time I ever met Snoop Dogg we made a song together. I was in Miami with Pharrell, in the studio cutting a record. This is when I was younger, probably 18 or 19. Snoop just walked in and you could smell it—I was like damn, I know exactly who that is. We started making a song, that’s how we met. My mom was at the studio too, I was smoking on the low from my mom. Snoop and I ended up just rapping back and forth, like damn!

How old were you when you met Pharrell? Did that feel like a turning point for you?
I was 16 or 17. Working with Pharrell was a confirmation, like ‘Okay, this is what’s crackin.’ But I feel like the real turning point was when I started to really find a sound that worked for me—branching off, working with a bunch of different producers. I’m trying to tap into a bunch of different stuff, ain’t just one thing. 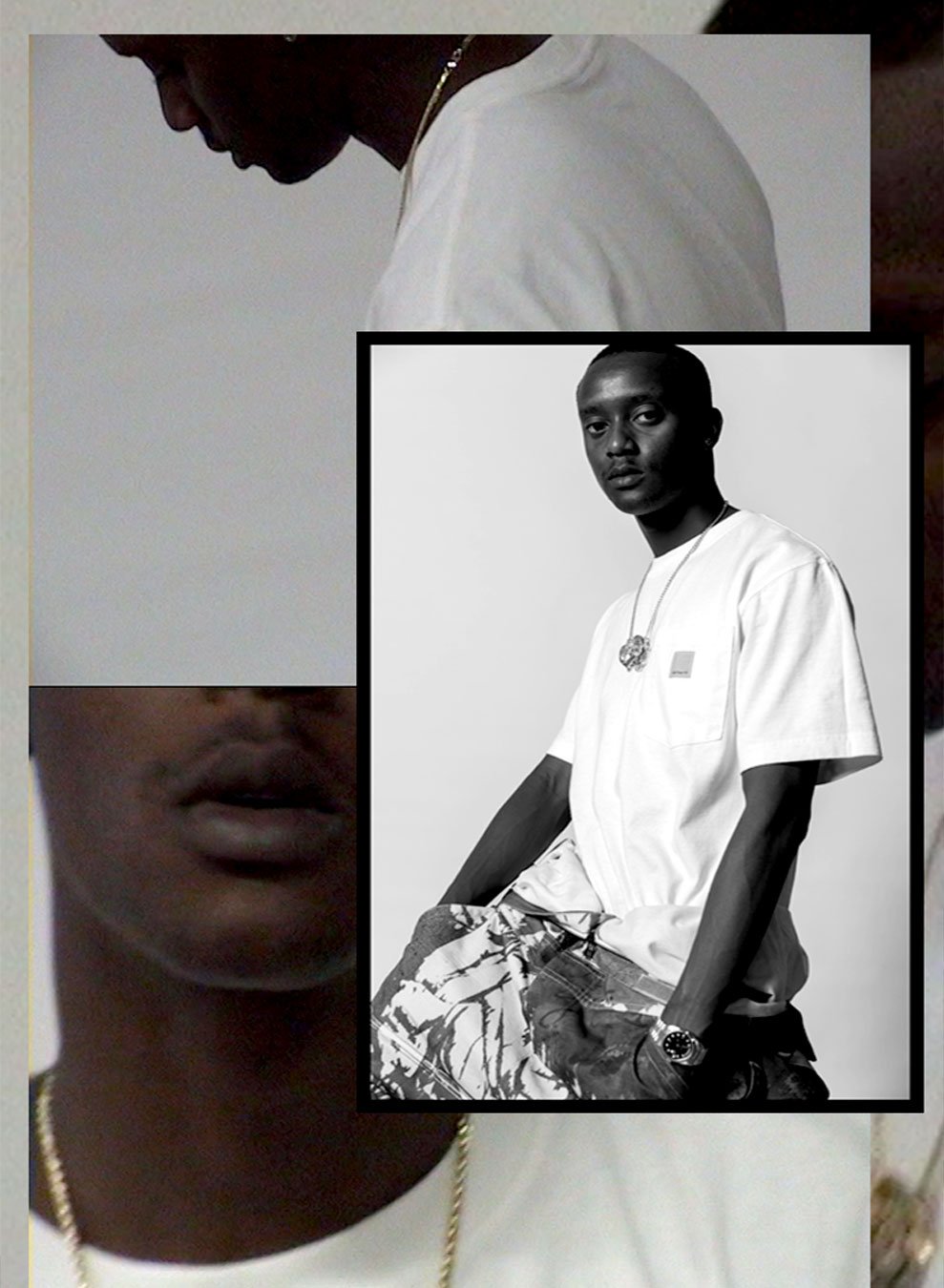 Jumpsuit from PERKS AND MINI.

How do you like to move in the studio? Do you like to have people around or is it all business?
It varies, you know? Right now my main goal is to build out a studio for myself. I’m tired of paying these big fancy studios by the hour, I want to have place in my house where I can just go to whenever, that’s how I’m trying to move moving forward. With the album, I had a bunch of different producers coming in and out of the studio, and I spent like $300 at Toys R Us on a bunch of toys: dinosaurs, lego, rubix cubes, yo-yos, nerf guns. So we’d just be having fun while the homies were working on the beats. I was trying to take my mind off the fact that this was my debut album and I’d never done this before. I just wanted to make it a good ass time so we had some weed, Henny, had friends over and girls from time to time, stocked up on food.

I noticed your chain before, is it Shenron from Dragon Ball Z?
It is fo sho the Shenron Eternal Dragon! He’s got dragon balls in his hands. 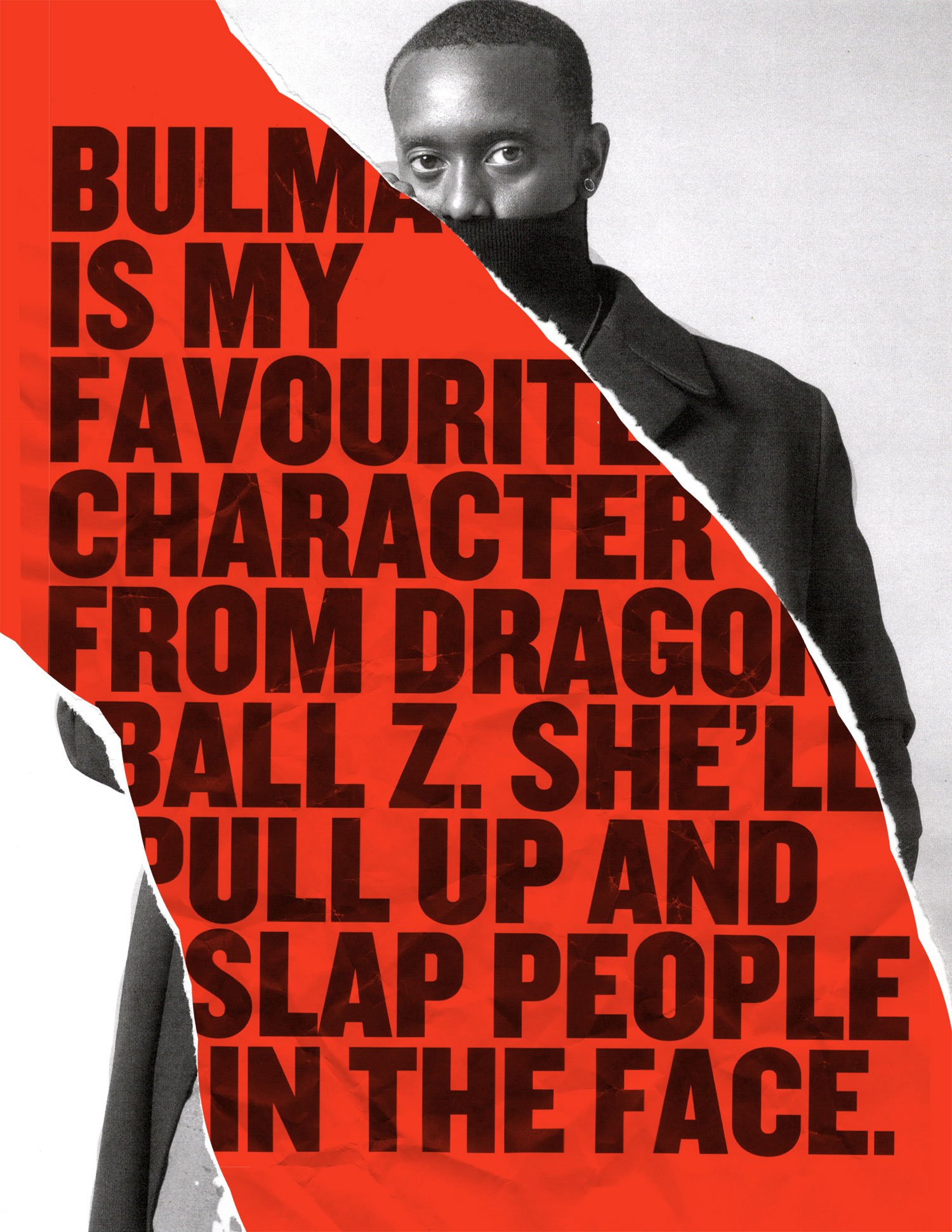 Jumper and coat from STRATEAS CARLUCCI.

Is Shenron your favourite character?
Well Goku is the big homie, but I’d really have to give it to Trunks. Or Gotenks. Actually—Bulma is that bitch! I think Bulma is my favourite character because Bulma has no superpowers, she’s just a woman but she’s got intuition, heart, passion and she loves her friends, she don’t give a fuck what the aliens are talkin bout. She’ll pull up and slap people in the face too. And you know who she had a baby by?

Vegeta.
Vegeta. The hardest motherfucker with the most pride. Got that dude to shut up! Bulma is definitely my favourite character.