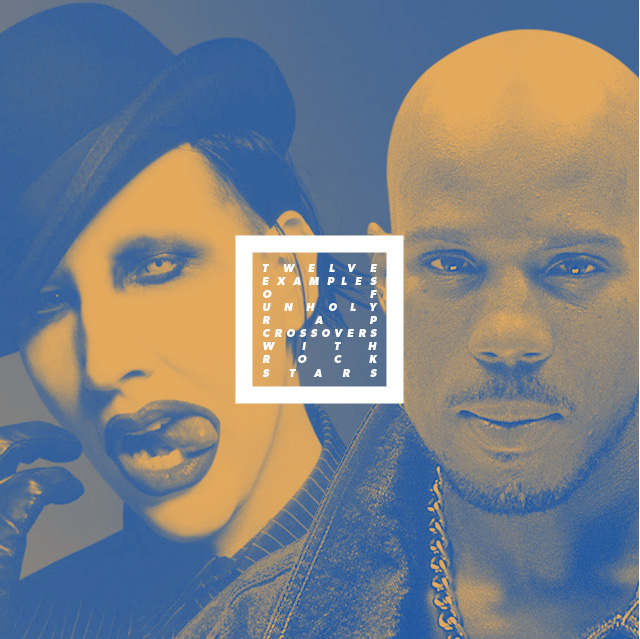 Ever since Rick Rubin forced Run-D.M.C. into a recording studio with an Aerosmith guitarist against their will and created a huge crossover hit, misguided A&R’s have been attempting to recreate the magic by teaming up rappers with big name rock icons in the hope that lightning strikes twice. As the following twelve examples demonstrate, this is nearly always a terrible idea.

The silver lining of this team-up between the former Genesis drummer and Eazy-E’s second most lucrative discoveries is the opportunity to watch Uncle Phil switch between mean mugging, unconvincingly pretending to listen to what the Bones’ are rapping about, and wishing that the fat bloke would stop putting his arm around him in a tunnel somewhere in Switzerland. The clip also includes the obligatory shot of dudes playing congas that are clearly just preset drum machine sounds to further insult the intelligence of music fans everywhere.

Puff Daddy with Jimmy Page ‘Come With Me’

It’s safe to assume that the producers of the 1998 Godzilla film drove a truckload of money up to Jimmy Page’s mansion in order to convince him to be involved in this musical abomination. Then, realising how god-awful the finished track was, they spent twice that amount shooting a ridiculously over-the-top video in an attempt to distract everyone from how crappy the song was. The Led Zeppelin axeman wisely only appears via a Jumbotron screen- possibly to prevent him from assaulting Mr. Combs for butchering a beloved rock classic with a self-indulgent, stream-of-consciousness rant that makes you wish that the giant lizard would stomp Puff into the sidewalk and end the entire ordeal.

It was bad enough that some cynical record label think-tank realised that an official ‘mash-up’ of Nu Metal’s golden boys with the most commercially lucrative rapper dude of the day would be easy money in the bank, but this live performance at the 48th Grammy Awards which drags out a clearly confused Sir Paul McCartney to warble out an “edgy” reboot of ‘Yesterday’ at the 2:30 mark makes me want to go and listen to a Ringo Starr’s 1981 Stop and Smell The Roses solo album until blood starts pouring out my ears. Sadly, the former Wings frontman didn’t learn his lesson and turned up looking even more confused in that recent Rihanna Guess Jeans commercial/single.

While it’s understandable that REM frontman Michael Stipe may have appreciated KRS-One’s often thoughtful lyrics as a fellow songwriter concerned with social issues, what’s baffling about this is that the Blastmasta’s talents are completely wasted on ad-libs and chorus shenanigans until the closing moments of the song where he unleashes an entire 18 seconds of rhymes over the band’s closest approximation of a “fonkee groove”. Clearly this was a conspiracy to get their respective record labels to fund a weed smoking session in an expensive recording studio.

DMX with Marilyn Manson ‘The Omen’

Basically anybody could have recited the dopey hook to this typically eerie DMX song. The track is a follow-up to the original ‘Damien’ from his debut album released earlier the same year. Why go to the trouble of recruiting a big name like Manson if you aren’t even going to get the dude to sing? Surely somebody in the Ruff Riders had a creepy uncle who could have chanted some nonsense on the chorus for a six pack of Miller High Life and a pack of Newports rather than whatever stupid amount of money was signed over to the shock value singer.

Sample line: ‘The snake, the rat, the cat, and the dog/How you gonna live when you’re in the fog?’

Ever wanted to hear Bob Dylan rap? Backed by a third-rate remake of The Whole Darn Family’s ‘Seven Minutes of Funk’ beat (best remembered as the loop from Jay-Z’s breakout duet with Foxy Brown, ‘Ain’t No Nigga’), MC Zimmerman drops four bars of his lyrics of fury at the start of this 1986 Kurtis Blow album cut. He isn’t heard from again until 6:21 where he repeats the same lines in tandem with Mr. Blow with little regard for staying on beat. It’s difficult to work out if Bob just wandered into the studio session by mistake and just started mumbling rhymes or if this was an officially sanctioned “duet” by some coke-addled A&R hack.

I’m going to pull the “Blame Dame Dash” card for this one. Who else but Jay Z’s estranged partner would think to book the Mash Out Posse for a feature on song from LFO’s (Lyte Funkie Ones) underperforming sophomore LP? The good news is that Lil’ Fame and Billy Danze didn’t soften their hard-rock verbal attack to fit in with the soft-as-kittens image of a boy band who confessed that they, “Like girls who wear Abercrombie and Fitch” on their 1999 hit single, ‘Summer Girls’. Instead, M.O.P. explain that, “On the other side of town a life is lost/A young thug was knocked off and the heat was tossed” before the Amanda Show regulars harmonise about blue skies and having your dreams come true.

Sample line: ‘A woman named Beatrice serves me coffee, and she smiled as if she cares.’

Slim Shady had been a very naughty boy in 2001 what with all of his making fun of pop stars and liberal use of the dreaded f-bomb back when he was a bratty bleached blonde who popped pills like Pez candy. As punishment, the organisers of the Grammys made him perform his hit song with a no doubt slightly confused Elton John. Considering Eminem’s low tolerance at the time for men who enjoy the company of other men in the Biblical sense, seeing Elton turn a great 45 King beat into some elevator muzak before they hugged and held hands didn’t do Marshall’s ever-so-important street credibility any favours. Luckily he attacked a hand puppet at the MTV Video Music Awards the following year. Street cred saved!

Sample line: ‘What’s this junk about us meant to be together? That type of crap will make me not want us to meet each other.’

File under: When keeping it well intentioned goes horribly wrong. What starts out at as a song to justify wearing a Confederate Flag-emblazoned Lynyrd Skynyrd t-shirt in public swiftly develops into an “open dialogue” aimed at addressing racial stereotypes. Paisley confesses that he feels “Caught between Southern pride and Southern blame,” only to be reassured when a remarkably accommodating James Todd Smith declares, “If you don’t judge my gold chains/I’ll forget the iron chains,”. Now that the fellas have solved the problem of 150 years of racism in America, maybe they can have a crack at sorting out things between Palestine and Israel? Or maybe they should have just taken a leaf out of Nelly and Tim McGraw’s Country Rap playbook and just stuck to the topic of broads.

Sample line: ‘If you don’t judge my do-rag, I won’t judge your red flag.’

Combining the pot-addled talents of your grandmother’s favourite rapper dude and the granddaddy of country and western stoners seems like a match made in half-baked heaven. Add the former token white guy from Ice-T’s Rhyme Syndicate turned Irish hooligan who finally settled into much success as acoustic crooner Whitey Ford, get Snoop dressed up as Long Beach’s answer to Johnny Cash performing in front of drunken rent-a-crowd, and what have you got? Hot garbage that no amount of cheeba cheeba can make sound good.

The Fat Boys with The Beach Boys – ‘Wipeout’

Twelve months before the Beach Boys scored their first number one hit in 22 years with ‘Kokomo’ from the Tom Cruise vehicle ‘Cocktail’, they got down with the clown princes of ’80s rap to remake the The Surfari’s 1963 hit. Predictably, the video is played for laughs and includes the first time in recorded history that a man has challenged Prince Markie Dee to appear in a bathing suit. Cue hilarity as the group formerly known as the Disco 3 hit the beach in LA and the old white guys drive a magical jeep around New York which transform all who see it into bikini and trunk wearing beach bums. The fact that this song charted at all is proof that not everything was better in the ’80s.

Sample line: ‘There was sand and sun and lots of fun.’

LL Cool J with Flea, Chad Navarro and Chad Smith – ‘I Make My Own Rules’

Considering that LL Cool J has one of the best voices in rap, why not get him to scream himself hoarse over a chaotic funk-rock workout courtesy of three Red Hot Chilli Peppers for the soundtrack to Howard Stern’s Private Parts flick? Clearly, Rage Against The Machine wanted no part of this project, so according to some sort of incomprehensible logic, this seemed like the next best thing. Cool J was so taken with this track that he re-used the title for his 1998 book, which is currently available at Amazon for $0.01 for a used copy.

Sample line: ‘An international threat to the power structure, scream when your eardrums rupture!’