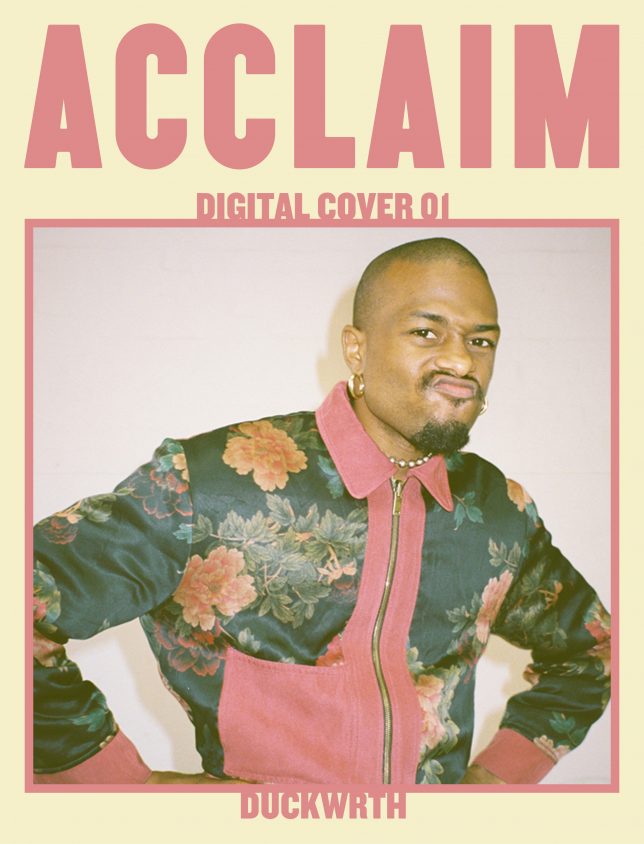 A bellowing, reverberated string of pianos, and pained, passionate croons mark the opening of Duckwrth’s new single ‘Love Is Like A Mosh Pit’. Together, the South Central LA rapper and Rico Nasty delve into the multitude of issues that love and relationships can bring. Producer Medasin follows the melancholic opening with deep 808s and trap-inspired drums, juxtaposing the sadness with a visceral aggression. It’s a tale of heartbreak, something Duckwrth has yet to explore much in his career thus far.

“People know me as a vibrant character, so I wanted to use this song to show my darker, moodier side,” he tells me on a Friday morning in Melbourne. He’s drawing on a yellow jumpsuit he brought in for the photoshoot, dousing it in texta-drawn flames and the ‘BLEH’ refrain from his new single. He’s in the midst of touring Australia for Groovin’ The Moo, exactly a year after playing the festival and a string of headline shows here in 2018. And in that time, the movement has grown. Tracks like ‘Michuul’ from his dance and soul inspired An XTRA UUGLY Mixtape in 2017 now have over 13 million streams on Spotify, and he even got a placement on the Spiderman: Into The Spiderverse soundtrack with ‘Start A Riot’. But the more success he gains, the more determined he becomes to showcase his diversity as an artist. “People really don’t know me as someone who is super emo, but that side is sort of the ying to my yang. I needed something to demonstrate that part of me.” 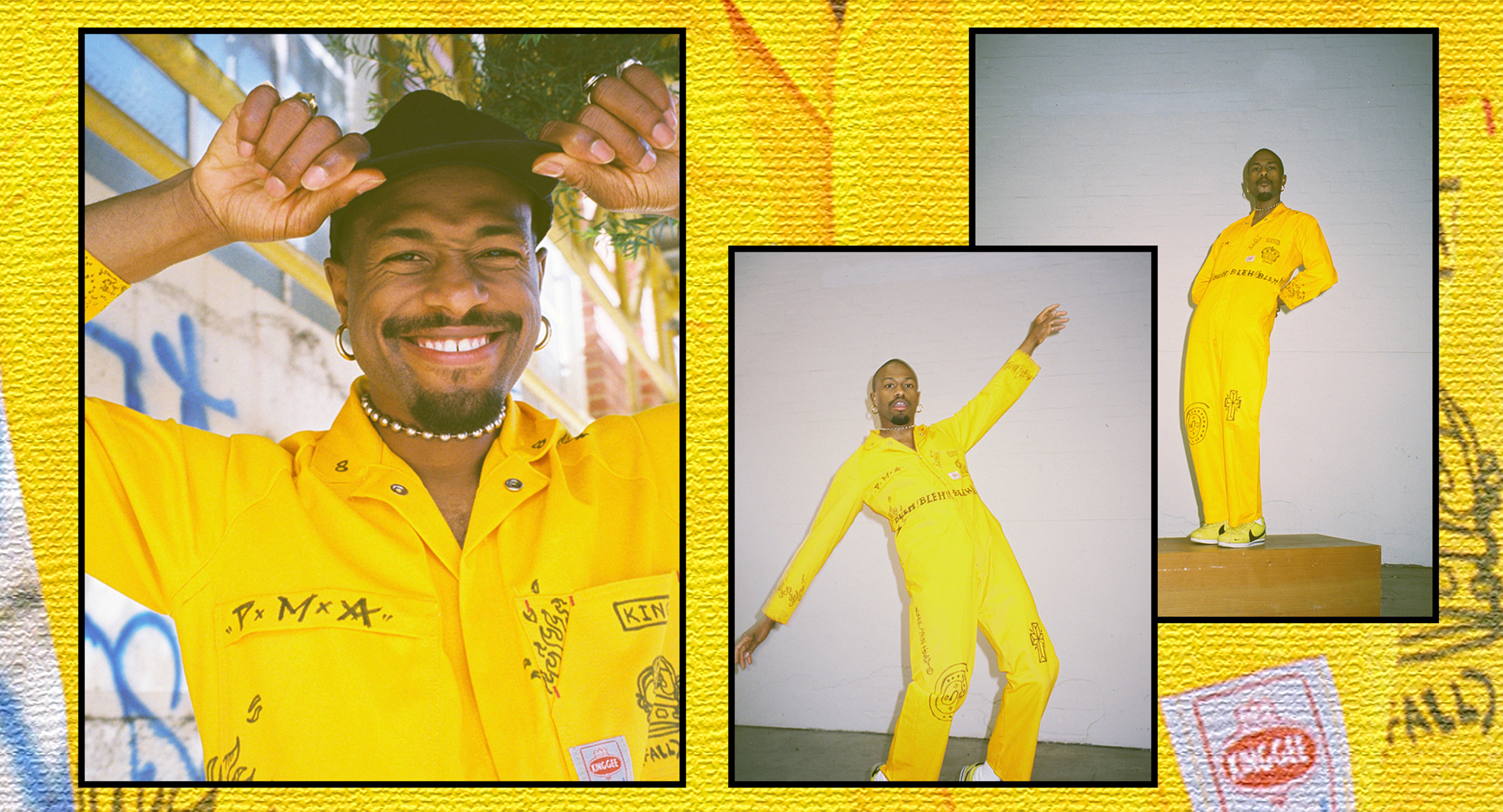 “People really don’t know me as someone who is super emo, but that side is sort of the ying to my yang. I needed something to demonstrate that part of me.”

Emo is definitely a genre he explores in his forthcoming EP The Falling Man. It’s a concept release that explores stardom, and the illusion of invincibility it can bring with it.  The three singles, ‘Fall Back’, ‘Soprano’, and ‘Love Is Like A Moshpit’, all find Duckwrth exploring this concept through the use of dark, bass-heavy sonics and raging drums. The focus is on Duckwrth’s issues in life and love, or, as he puts it, “Fears that manifest the demise of relationships.”

Even something as seemingly insignificant as Duckwrth shaving his head acts as a visual marker that this isn’t the same artist we heard on An XTRA UUGLY Mixtape back in 2017. He’s a blank slate—aesthetics can’t define him and material objects won’t fulfil him. “The Falling Man is about a prideful and arrogant king who believes that he wouldn’t fall for things like love or hype and that it’s not in his nature,” he says. “But everything he said wouldn’t happen, does. It’s a story about humility because no matter how big you are, you can fall off.”

The Falling Man fits right in with the current movement of punk-influenced rap. But it’s more than a trend for Duckwrth—punk was one of his first loves. He has a real affinity for bands like Pure Hell and Death, and he tells me he’s really digging Ho99o9 at the moment. But his all-time favourite band is Bad Brains, the revolutionary punk group from Washington known for their lead singer H.R’s vocals, which Duckwrth describes as “insane”. His adoration is made clear when he lifts his shirt up, revealing a torso tattoo reading PMA, which stands for ‘Positive Mental Attitude’, a reference to the band’s song ‘Attitude’.

It’s a motto Duckwrth lives by. It’s how he overcame the struggles he details on the new EP.  According to Duckwrth, PMA represents one of the most important values a human can have: optimism. “It’s about the mentality of people, if you think things are going to be fucked all the time, they most likely will be,” he says.  “I watched this movie called Tomorrowland where the world had a 100% percent chance of ending, but one man with a little optimism managed to bring it down to 99%. I always thought that was a dope perspective on things.” “It’s about the mentality of people, if you think things are going to be fucked all the time, they most likely will be.”

The LA rap sound has come a long way from its gang-affiliated origins. And while that trend still exists— YG and Blueface are two acts that come to mind—the city has also become a hotspot for music that’s more diverse and wide ranging in its influences, and Duckwrth’s friends Channel Tres and August 08 are at the forefront of this new wave. Duckwrth pinpoints 808s & Heartbreaks as a turning point for hip-hop, noting that it “made males emote more”. He recognises the importance of wearing your heart on your sleeve when you’re speaking to the youth of your city. He’s experienced the adversity that comes with living in the projects, and knows that sometimes music can be the brightest light on the bleakest block.

Duckwrth has made it his mission to show people that there’s a world of opportunities out there. “The conditions of the projects are set up for you not to leave, it’s filled with things like fast food that break the productivity of your body and mind,” he says. “But there’s always a rope you can grab on to. With the right influence and circumstances you can get out, and that is what we’re trying to show with our music. My career is a blessing.” If Duckwrth has displayed one consistency over the course of his career, it’s his desire for diversity and his hunger for change. Ultimately, his goal is to use music to improve people’s lives and set a positive blueprint for kids in the projects. But amongst all this change, there’s one thing that remains consistent— his authenticity. Whether it’s a tale of lost love, a dance track, or a cut for a movie soundtrack, he remains true to himself. It’s this sentiment that informs his term ‘UUGLY’, where you learn to accept the person you are, and Duckwrth thinks this self-acceptance can only lead to a better society. “We’re taught to tell people we’re okay, even when we’re having a shitty day,” Duckwrth declares. “But if we’re transparent with one another, the conversation becomes better. You should embrace your flaws because some of them can’t be changed, who gives a shit. Just be comfortable with who you are.”

Check out Duckwrth’s EP The Falling Man below: