Luca Venezia can’t stand still. A late call-up to the Red Bull Music Academy Culture Clash at Manhattan’s Roseland Ballroom, the man better known as Drop The Lime and his Trouble & Bass crew are operating on life support after pulling yet another all-nighter to prepare themselves for tonight’s main event.

Luca’s West Coast T&B counterpart AC Slater backs up his Brooklyn-based comrade. “I took the redeye in Saturday night and we’ve been literally working from 10.00 am until 3.00 am every night.

“It’s an adrenaline rush,” he adds, “and we’re ready for battle.”

The Roseland is enormous, with a basement cloakroom big enough to host a 300-capacity sound clash of its own, but tonight its stage has been extended 15 metres forward and to each side to accommodate the four opposing NYC sound systems. Trouble & Bass rep electronic dance music, in place of the originally announced Fool’s Gold; Federation Sound bring the authentic reggae styles; Just Blaze and Young Guru harness the power of a decade-and-a-half at the coalface of hip-hop; Que Bajo?!, with their frenetic tropical riddims, are the night’s wild cards. 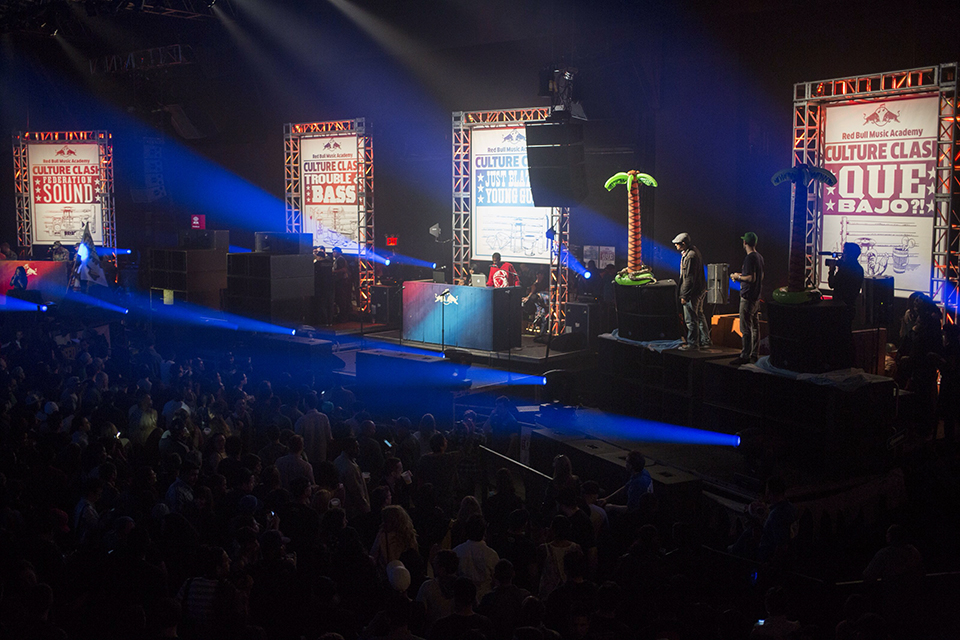 Their respective soundchecks alone are enough to shake the loose wax clean out of your ears. Heavyweight business is afoot.

A decibel meter will measure crowd response to every crew at the end of each round to determine the winner. The only rule? No double-ups of tracks dropped by other crews, unless you announce it and drop a remix or live version in response.

Let’s get ready to rumble. 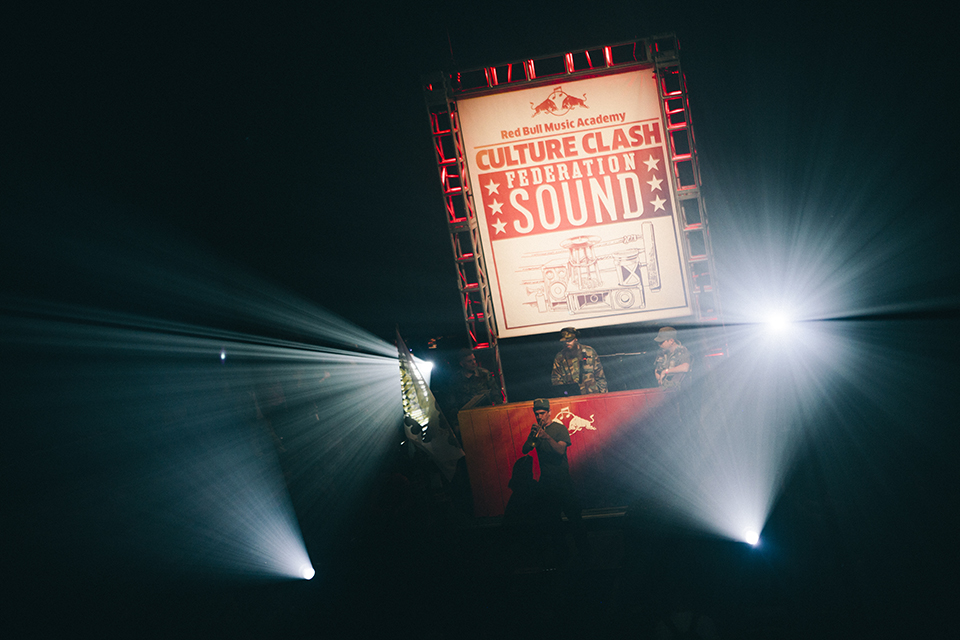 ROUND ONE: TEMPERATURE’S RISING

15 minutes per crew. Play whatever the fuck you want. No scores are recorded.

Federation Sound are ready to blaze the stage before the front of house sound is. “I could talk shit all night and we’d still win this Clash,” says team leader Max Glazer, he of the spectacular Castro beard, yet the lone trumpeter playing Reveille eventually signals a jaunt through the sounds of Jamaica – from dubstep to proper dub to dancehall – signposted by Max Romeo’s Chase The Devil. And plenty of air horns from the floor. And wafting smoke that doesn’t smell like it’s coming from the burning soles of rubber shoes.

The Trouble & Bass crew’s MC stands on a half metre high platform, and is still half a head shorter than the speakers that flank him. There are Darth Vader samples. There’s the Harlem Shake. There’s the Seinfeld bassline. There’s the Misfits and Attitude. There’s an abundance of flanger. The dancefloor is alive. And this sound system actually hurts.

Young Guru asks for some “motherfucking noise” for the 17 years of hip-hop he’s helped birth, as Just Blaze enters the stage dressed as Reverend Cassius King to the sound of Amazing Grace. A quiet prayer is said for the imminent death of the other crews, and the crowd shouts back “Hova” within seconds of the first beat drop. From the beach to the basement, we’re now on the block, and we’re not alone. Freeway is the first guest out on the mic, followed by Memphis Bleek. The dancefloor is sending diamond shaped hands to the stage. JB and YG don’t just want to win, they want a knockout.

The accents of the Que Bajo?! crew are sub-tropical, the beats are subterranean, the vibes are sunny, the party is rocking. Their dancer doesn’t even know how to stop gyrating, and the crowd are mesmerised. Or are they still dumbstruck from the heat that preceded them? Either way, the QB vibes are the night’s most giddily infectious, they bring the most ‘culture’, and they’ve brought the night’s biggest fan club.

Sparring is over. It’s time to lace up the gloves. ROUND TWO: THE SELECTOR

(12 minutes per crew. Play whatever the fuck you want. This time it counts.)

Trouble & Bass mean business. Luca, AC and co. drop pre-recorded disses on the other crews’ mothers, then Smack My Bitch Up and Smells Like Teen Spirit, because someone always does at this type of affair. They’re joined by a scantily clad woman holding signs like “Troublemakers Make Some Noise!” and “Bass!”, and Raphael (the Ninja Turtle, not the renaissance painter) holding a pizza box. Flatbush Zombies appear from nowhere, drop S.C.O.S.A., then vanish. Treading on the toes of their opponents’ genres is apparently fair game.

Que Bajo?! come out swinging with a sound best described as happy hardcore played on piano accordion by a group of castaways. Pure fire. They have the best energy of all the crews, but do they have the recognisable hits of their opponents? Moving from mambo to moombahton, it seems not to matter as the crowd leap skywards.

The other crews remain behind their battle stations throughout; readying their arsenals, plotting their plans, shaking their heads with disdain at each blow from their opponents.

“Who the fuck is Que Bajo?!” asks Max Glazer in the middle of a Federation Sound dubplate dissing each crew individually. His is the cockiest of all the crews. The sound clash is their turf, after all, and Glazer wants everyone to know it. He welcomes his sister from Jamaica, Tifa, to the mic, before a double rewind intros Ricky Blaze. Then comes the showstopper, three booty shaking dancers expressing themselves so fiercely it’s a wonder the stage doesn’t disintegrate below them.

Just Blaze walks to the front of the stage toting a t-shirt cannon, fires dead presidents into the crowd like it’s no big deal, let’s the dust settle, then does it again. They unleash an EDM remix of Bugatti. Their hype man this time is Wale, who dishes off to Pharoahe Monch for a trap version of Simon Says (Get The Fuck Up). They have the support of a vocal crowd and the biggest punches to throw, provided they’ve got the skills to match their opponents.

Not this time, as Trouble & Bass steal the round from under their noses. The chorus of boos that greets their celebration makes you wonder if RBMA’s decibel meter has a glitch in its matrix. 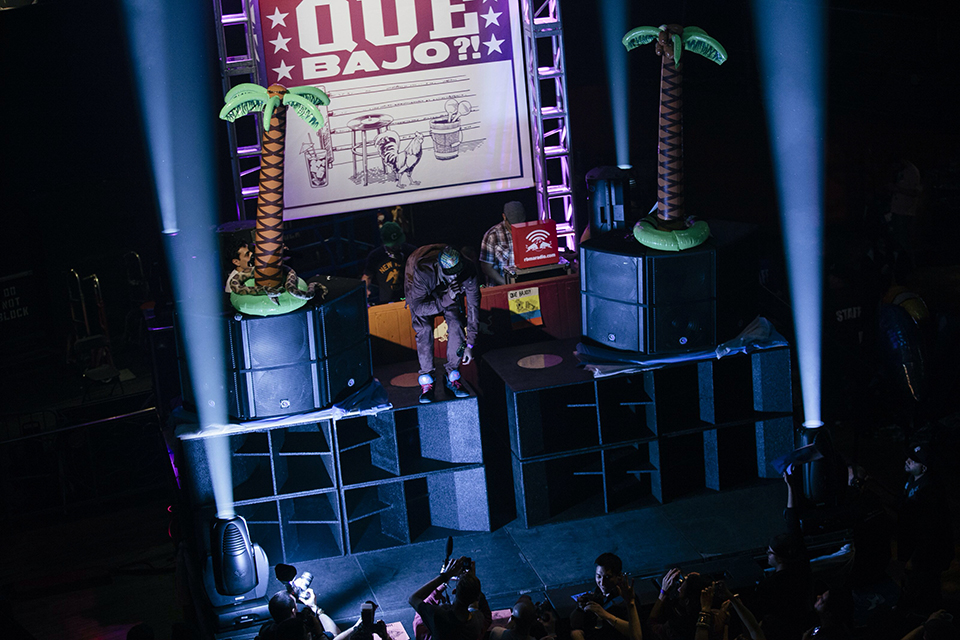 ROUND THREE: SLEEPING WITH THE ENEMY

Que Bajo?! have drawn the hip-hop straw, though their interpretation of it surfs the same sonic turf as their signature sound. The same turf, only with more dancers, the grim reaper, and the American debut of Birmingham MC Lady Leshurr, whose rapid-fire tempo burns through words with the speed and power of a Gatling gun.

Just Blaze and Young Guru try to disguise their obvious lack of reggae chops with a plethora of air horns, but without their hits and cavalcade of guests they’re floundering. Badly. Styles P and Jadakiss eventually storm the stage to no avail, and by the time Arrested Development’s People Everyday closes proceedings, most pundits are wondering where it all went wrong.

Tropical vibes aren’t entirely foreign to the world of Trouble & Bass anyways, but to be on the safe side they bring moombahton maestro Dave Nada up to the plate from DC to rep the 100 bpm flavours. They wear Hawaiian shirts to mock ‘Que Crappo’, Day of the Dead masks, and Nina Sky bound on stage for the finale. All the while, their dancer’s moves would make any innocent pole look like a natural.

Max Glazer is on the mic again, declaring “This electronic shit is easy!”, though what he and Federation Sound dish out has more in common with hip-hop than the Trouble & Bass crew that they’re trying to mimic.

And it’s all coming up Trouble & Bass, who take a 2-0 lead. The final round beckons, and it’s going to get hectic. 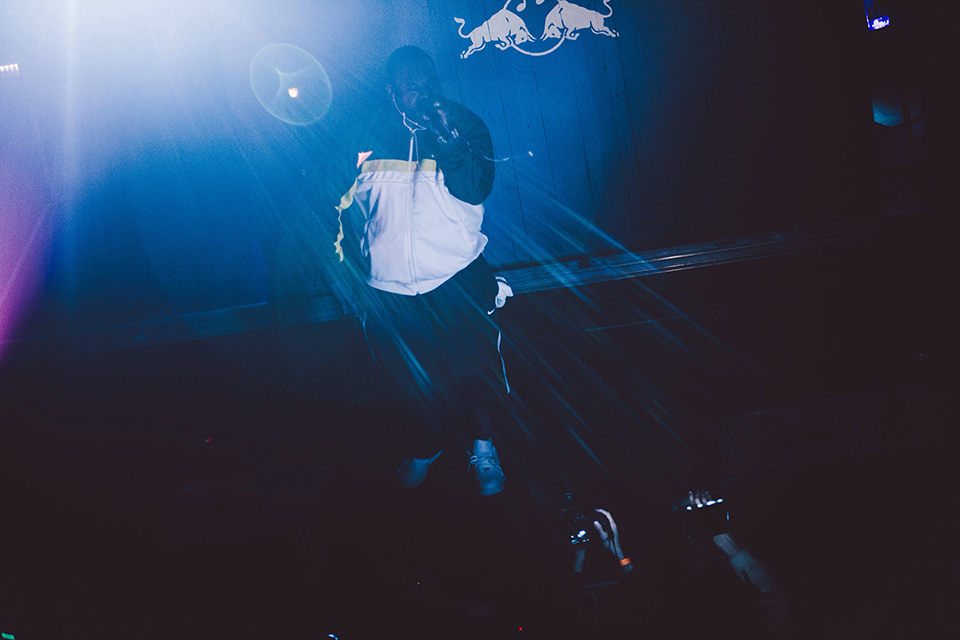 ROUND FOUR: THE DECIDER

Just Blaze and Young Guru come out swinging, first with Bun B on the mic, then Raekwon getting the crowd onside with C.R.E.A.M., and finally 2 Chainz in blinged up tracksuit while Blaze fires t-shirts into the crowd. But have they left their big hitting too late?

Que Bajo?! know they’re outmuscled when it comes to star power, but they’re still the clear winners in the stage presence stakes. “Those white boys had to hire a Latino to play their tropical set for them!” jibes their MC in reference to Trouble & Bass, who sit nonchalantly at the front of their stage reading (or falling asleep under) mock-ups of the New York Post with “Trouble & Bass Win Culture Clash” on the cover.

Federation Sound’s reggae call-and-response even gets the VIP balcony interested. By this stage everyone is tiring from the sensory overload and constant oneupmanship. The Culture Clash, like the Hollywood action flick of club nights, is one set piece after another until you think that’s the grand finale.

Then the bad guy still has some fight in him, so you have to climb back up off the canvas for Trouble & Bass, aiming for a unanimous points decision. “You’ll know, trust me,” Luca said of their special guests before the first tune had rolled, and yes, that is Robin S. singing Show Me Love right there, injecting the Ballroom with its first PLUR of the evening. They follow up with Cam’ron doing Salute and I Really Mean It. Stop the fight, there’s blood on the dancefloor. 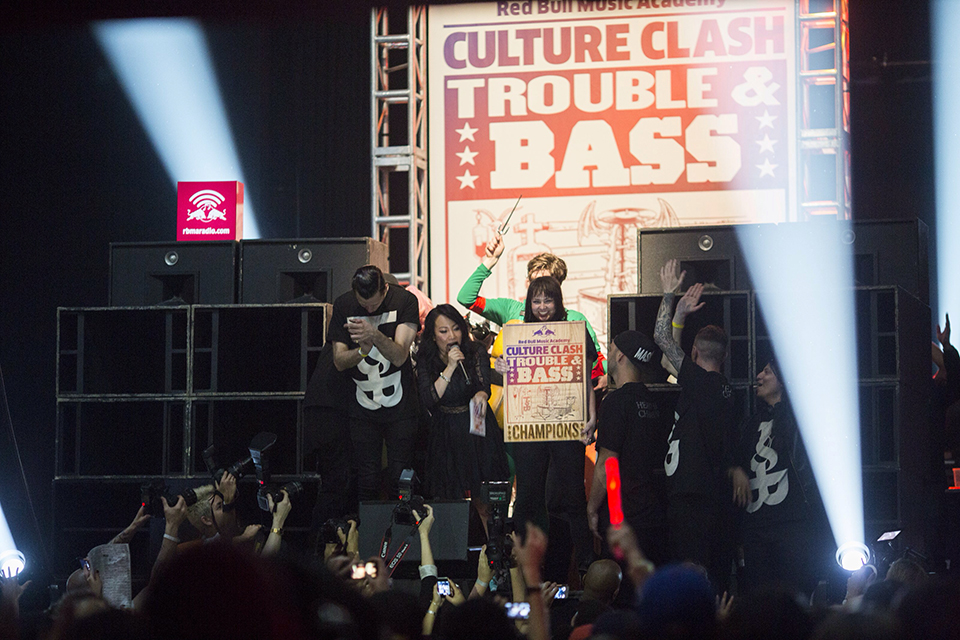 “I wasn’t really familiar with them coming in,” confesses Miss Info of the winners the next morning. “But by the end of the battle people had to give it up for them, because they did earn it.”

Though the “Que Bajo?!” chant rings out long and loud, the decibel meter has already spoken. Drop The Lime, AC Slater, Star Eyes, MC Telli (Ninjasonik) and the assorted hangers-on of Trouble & Bass have dominated the clash to take all four points on offer.

There’s another torrent of boos from the floor, until T&B roll play on their victory lap set and bask in the glory of a clash they never looked like losing, sleep deprivation and all.