Huntly is as Huntly does

We spoke to a third of the Melbourne trio about industry visibility, Delta Goodrem, and going to the footy for the first time.

It’s a warm day in late October when we meet Elly Scrine of Melbourne trio Huntly for a coffee. They’ve had a positive, albeit frantic, week. They’d completed their research thesis on music therapy days before, and were due to spend the weekend showing some teenagers around the recording studio (part of a therapy program Elly routinely works with). Huntly’s most recent music video had dropped a month earlier, and their follow-up ‘Wiggle’ was a fortnight away from going live.

Elly speaks passionately about their work in music therapy, and we exchange stories of our former years in Brisbane. After moving to Melbourne with a “bunch of songs written,” Elly says Huntly officially formed not long after their arrival. Elly, along with band members Andy and Charlie, have kept up a steady stream of releases since 2014’s ‘Go Out.’ This year’s singles, ‘Drop Gear’ and ‘Wiggle’, live up to Huntly’s promise of “making doof you can cry to.” 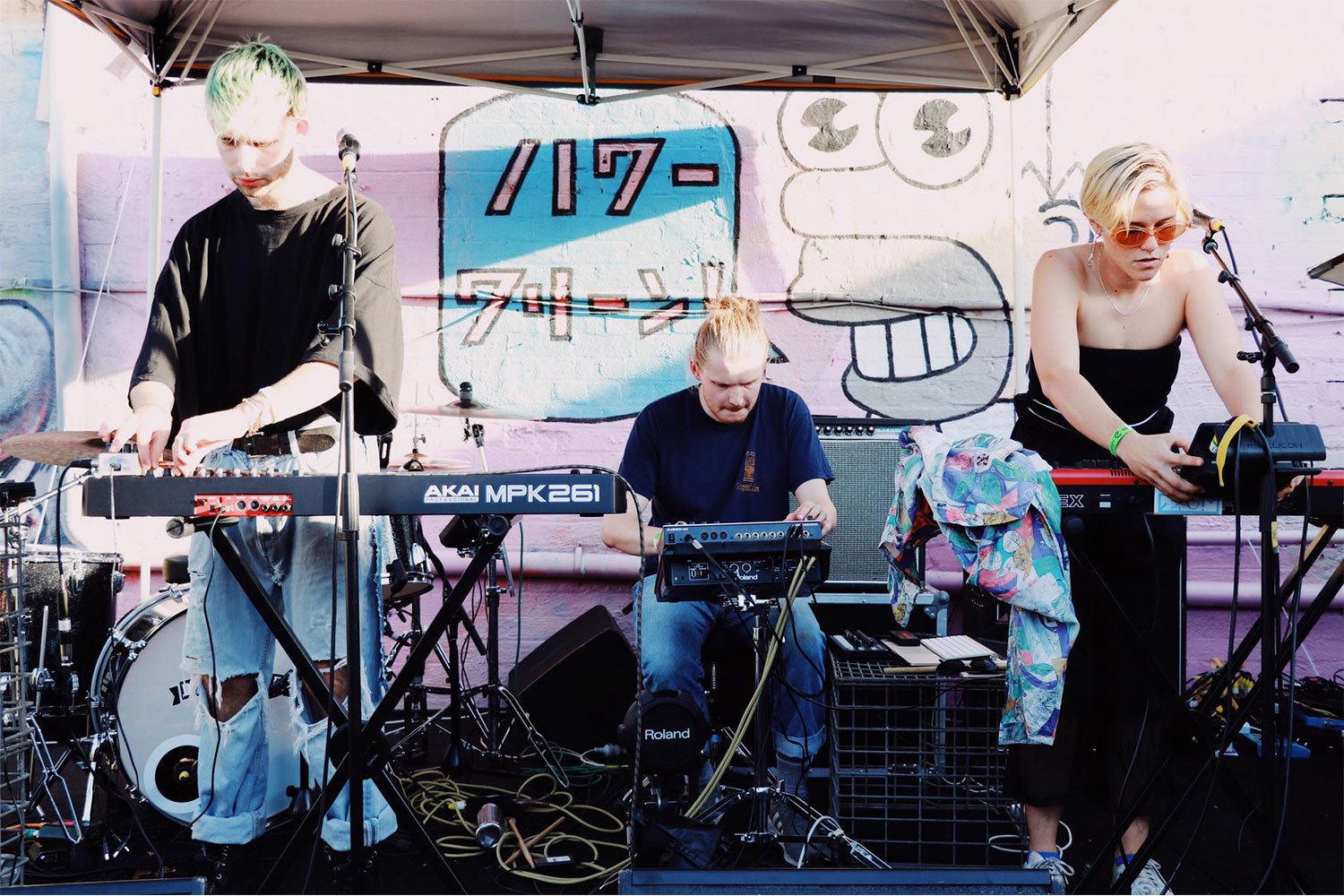 I know you met Andy while travelling in Nepal. But how did you meet Charlie?
Well, Charlie and I actually met at a café. He was working there and I used to come in all the time. We actually first spoke about music at Meredith or Golden Plains before I’d even moved to Melbourne.

Where does your music taste overlap with Charlie’s?
It’s changed so much. We all share some really similar influences. Charlie and I both listened to a lot of jazz. Charlie’s played a lot of jazz piano and I studied jazz. But then, Andy and I have really similar music tastes. We’ve both gone through the phases… both of us getting into UK garage. Charlie’s more punk at heart, whereas I really love R&B. We bring different sounds to the table for sure. Actually, when Andy and I met in 2011, we both really liked James Blake. But now, I’m like “James Blake…why don’t you ever play with a woman?” I’ve got some questions now for James Blake that I didn’t quite have articulated back in 2011.

I feel like it’s really important for band members to have their own tastes in music.
Totally! The three of us have come from quite different musical tastes and identities, but at the same time, we have to acknowledge the privilege the three of us occupy as we move through the world. As white people with similar-ish class experiences, we share a great deal of privilege and we work to hold ourselves accountable to that. All three of us go on very different journeys to think about we engage in our position as settlers in colonised Australia. We’re always trying to do better at that. Having three people who are really dedicated to that kind of critical thinking is something that is really important. We have different musical influences and different spaces that we occupy and are bringing to each other’s awareness.

It’s really important. I know you always acknowledge the traditional custodians of the land at your live shows. I think that’s really crucial for any band to do. I’d love to hear what you think about our country’s music industry and its inclusivity?
I think there’s so much discourse in the Australian and international music scenes about the issues around safety and inclusivity and diversity that they’ve become real buzz words. I’m excited about the very real change that is happening, but I’m also sceptical and remain really critical. I think any work towards “equality” in Australia has to centre Indigenous sovereignty. It doesn’t feel like progress to acknowledge country. [As settlers] it honestly feels like the absolute bare minimum. It’s also a very complicated space because there shouldn’t be any level of wanting to get a pat on the back for it. It’s just what you do.
Navigating your place in a colonised country, like Australia, is not a simple or easy answer. In regards to the Australian music industry, I think there has been real awakening around issues like sexual assault and the male dominated nature of so many different sectors of the industry. From the representation of women on line-ups to who controls labels to who’s on those labels… these are things I think about a lot. I do think there’s been a lot of progress made. Whether that’s just people waking up to structural and cultural change. The patriarchy, white supremacy, gender-binary, these are structures that our society is built on. They’re not going to be changed by having a really diverse line-up. But I do think the public recognition of these issues is great. All of the different collectives and voices and initiatives who are articulating their experiences that have been marginalised are so important.

It’s for sure a start. I don’t think it will ever be finished.
It’s important to remain sceptical because so much work is to be done. You can’t just reform a system that is broken. You have to abolish the entirety of it. But that’s big work.

I agree. Actually, I’d love to chat about your ‘Drop Gear’ video.
I’m obsessed with it.

How was going to the footy?
It was terrifying… I’d never been. I was with a group of ten or fifteen queer people. And I don’t think any of us had ever been, so we got free tickets because of a program the AFL runs. The video’s directors, who are a visionary cinematography couple, make really interesting and artistic pornography. Honestly, it was the best weekend of my year. I’ve had a pretty intense 2018 and flying to Sydney and spending a weekend with a very warm and artistic group of queers was a dream. The footy was great. People were a little sus and cops were staring at us waiting for us to violate some kind of law but mostly people were like ‘are you guys in a theatre group?’

Ha! I can definitely see why they would have thought that. How would you describe your live show?
We’ve always played everything live, up until this year where we’ve experimented more with programming. It has been really exciting for me to move away from my keyboard and engage more with my audience. I have a bit of an ambivalent relationship with it because I still feel very strongly about playing live. That’s something that the three of us toy with a lot, whether we just want to be playing along to things or creating every part of it there and then. We do a mixture of all of that now. I really enjoy manipulating my voice. I use a vocal effects station where I really like creating things in the moment there. I love playing with how you that can support and shape the intensity of a story.

I feel like live music has a real thing to do with emotional intelligence. The way people come out after a show and their perspective on the artist and the way they interact with music can be drastically different.
I think about that a lot, as in how to create a relationship with the audience. There are some lines I sing, and I love looking into the eyes of every single person I can find in the crowd as I do. There’s a line in one of our songs, ‘We Made It’, that’s dedicated to one of our best friends that we used to live with. He lives in Sydney now and is becoming a famous actor, and the line says ‘You’re gonna be a big, big star.’ And even if I’m having a shit show or I’m depressed as hell, generally I find a moment of pure elation or heart-bursting joy when I’m looking out into the audience during that song.

How do you guys work together in the studio?
It’s a real mix. For a few of our singles, like ‘Drop Gear’ and ‘Wiggle’, I’ve kind of started out the song and then I’ll bring it to the band and we’ll work it into being a band song. I’ll record the keys and the vocals. Whereas other songs, like ‘We Made It’ came out of a jam. The studio is generally one of our houses up until this album that’s about to come out. We got a grant so we got to record a whole bunch of it in a really beautiful studio.

How was that compared to a home studio?
Going to the studio and recording vocals, live piano, and a choir with some of our really good friends was amazing. To be in this beautiful space with incredibly expensive instruments felt like such an honour. Also having external people there creates a new dynamic. Whereas if it’s just the three of us at home, doing take after take, things can get more complex and interpersonal. Going into this different space that felt quite professional, and having engineers to do work where we’re used to doing it ourselves at times felt amazing and at times, made it feel less personal. It was such a privilege to work in a studio where, you know, Delta Goodrem’s on the wall with her CDs. That was a highlight for sure. I’ve recorded in the same studio as Delta. Now I can die.

(Laughs) Pinnacle reached! Can you choose a song that describes each member of Huntly?
Mine would be ‘Self-Control’ by Frank Ocean. Andy would be something by Four Tet—I feel like they would be like ‘Oh my god that’s so old, I’ve moved beyond Four Tet.’ But Four Tet is such a technically skilled visionary but is also has such a gentle musical presence. That, to me, represents Andy. Charlie would be something kind of punk and warm and personable. Like maybe something by the Go-Betweens? If the Go-Betweens have a song that relates to dinosaurs… it’s that for Charlie.