However vaguely, you’ll have to be aware of the fact that Iggy Azalea teamed up with Britney Spears to make a song. That song was ‘Pretty Girls’. In an attempt to repeat the success of ‘Fancy’ by clinging close to the synth-y baseline and excessing in overtures to bygone culture. ‘Pretty Girls’ came out with a video that didn’t help its cause either, the saccharine scene where Iggy parodies a valley girl accent is woefully close to what she’s been criticised for her whole career.

Turns out the song flopped. Go figure. It only managed to get to number 29 on the Billboard charts before dropping from the Top 40 completely after a mere three weeks. Like she’s been accused of in the past, Iggy played the blame game and shirked responsibility. Taking the opportunity of a fan showing her love on Twitter, Azalea pretty much said the song’s failure had nothing to do with her and that the fault lies with Britney’s team. 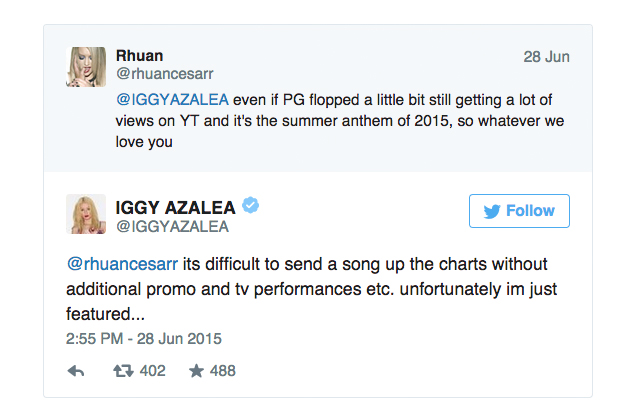 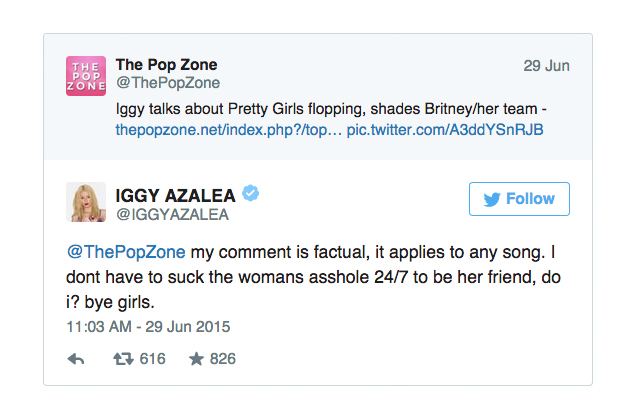 Most will agree there’s no reason to go full Human Centipede, but she could at least own her mistakes and accept she played a huge part in making a derivative song. You tried to rip yourself off and people didn’t fuck with it. Cool, move on. But because she didn’t, she’s compromised her personal brand and, probably, her relationship with the princess of pop.

After delaying for months, Azalea cancelled her upcoming tour citing a “creative change of heart” as the reason, even though some other sources have said that it was because some of the shows had only sold 20% of their seats. Seems Britney had heard this too and responded to Azalea’s cop-out with some classily subtle shade. 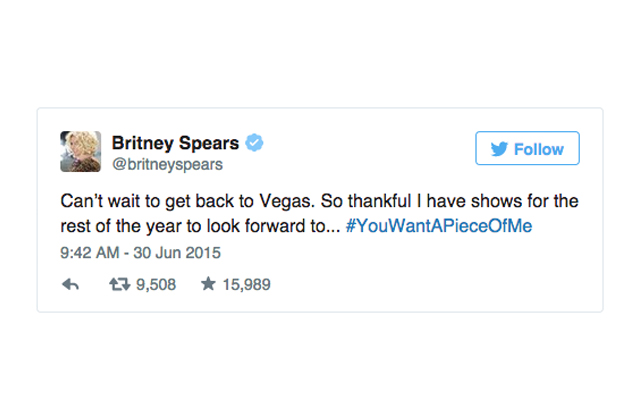