You get the sense that electronic musician Cyril Hahn has blown up faster than even he could anticipate. After a series of killer remixes, he’s dropped his EP Voices to an already ravenous worldwide fan base and is consequently selling out some shows faster than he can announce them (I’m looking at you, Copenhagen). It’s warm fuzzy background sounds layered with modern dance percussion has aided him in already establishing a distinct flavour to his sound. He’s hitting Australian shores real soon so we got him to tutor us in Cyril Hahn 101. Check it below.

What, to you, has been the most unexpected thing about your sudden success?

The fact that I can pursue music for a living is still beyond me. I never anticipated for it to be anything other than a hobby.

Is there an aspect to production or your potential sound that you aspire to incorporate in future work?

My recent work is a lot more analog and raw sounding I think. A lot of electronic music sounds very sterile to me so I’ve been trying to create a warm lo-fi sound that I’m very happy with. I’ve also experimented with using my own voice but not sure yet if that’ll go somewhere.

You’ve cited post-rock as a heavy influence that aided your transition to electronic music. Would you ever move into more conceptual territory with your current sound?

Yeah I’d love to work on a soundtrack. I feel like soundtracks really allow you to explore music beyond the common structures of pop/electronic music. It’s a lot more about texture and dynamics which is fascinating to me.

You’re obviously versed in the prominence of B-Side acapellas on records from one to two decades ago, contributing to your number of RnB remixes. Does that come from collecting those records yourself or honed internet search skills?

[Laughs]. No, I owe that all to the internet.

What is it about working with acapellas that you enjoy so much?

It’s hard for me to pinpoint why I am so drawn to acapellas/vocals. Maybe it’s the fact that I don’t find my own voice very interesting and that’s why I seek out vocals that move me. I also just love chopping them up and turning them into something entirely different.

As someone who has come across success through doing something you simply enjoy, is it labouring to be subjected to unnecessary analysis and questioning about your art history major and background?

Not really. I think it’s natural that people are curious when somebody appears out of nowhere.

Your track ‘Raw Cut’ reminds me of a Four Tet track that’s been packaged in a much more club-friendly arrangement and you’ve certainly mentioned Kieran Hebden in interviews before. Do you intentionally transform genre vibes into a more dance friendly experience?

I think a lot of Four Tet’s music is deeply rooted in club culture as well; or it makes me wanna dance, that’s for sure. I don’t think there was ever an intention on my part to make my songs more dance friendly but it probably just happened naturally once I started playing more concerts and witnessed how people react to music on the dance-floor.

On many of your releases so far, there’s audible record hiss on some tracks. (‘Raw Cut’ from Perfect Form and ‘Breaking’ from Voices for instance.) is that an intentional aspect of your production? If so, what motivates you to create that presence?

I’ve always been drawn to music that has a warm lo-fi aesthetic. I’m a sucker for white noise, tape hiss etc and it’s definitely something I’ve always worked on. The ways in which you include noise in your music are endless which I love.

Is there anything you’ve learnt so far that you’d like to tell others aspiring to create something people would enjoy listening to?

I think the most important advice I could give is to have with what you do and not to worry about what people think about your music.

Find out more about Cyril’s Australian tour at Loud Entertainment. 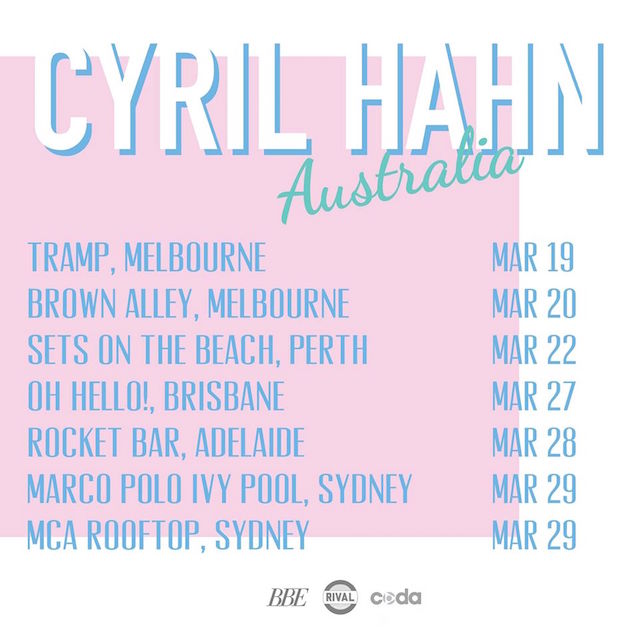