So in today’s instalment of music world insanity we’ve got the curious case of Peter Andre Vs Talib Kweli. See, Andre (who you might remember from that one song where he rocks bangs so serious that they’d take you to the movies) has a new album coming out.  Perhaps more shocking than that is the fact that the leaked track listing co-credits legendary conscientious rapper Talib Kweli with an feature on track number four ‘Fly Away’.

In fact, apparently this news was so surprising that Kweli himself wasn’t even aware of it. In a volley of angry tweets fired at Peter Andre he accuses the musician and his producers of lifting an original verse from his own coincidentally named track ‘Fly Away’.

wow @mrpeterandre you just take people verses from other songs and put them on your album? Thats what hot in the streets? ok.

whoever produced Fly Away for @mrpeterandre is a douchebag. They took my verse from another song w/out permission. It’s abt to be a fun week

Hey @mrpeterandre I have a REAL song called Fly Away not that trash from your album, check it out http://www.youtube.com/watch?v=ww61xukChmQ … #attacktheblock!

How somebody tell you you on an album you never recorded on? then when you hit they mgr he like “what, we gave u publishing!” lol

I protect the integrity of my music like a grizzly protects cubs. Woe to those who actively stand in the way of that.

Kweli claims that he approached Andre’s management privately to no avail before making the matter public on the social media network. His timeline is now under assault from Andre’s vocal fans, who are apparently unaware that the golden era of the Nineties are now well and truly over. 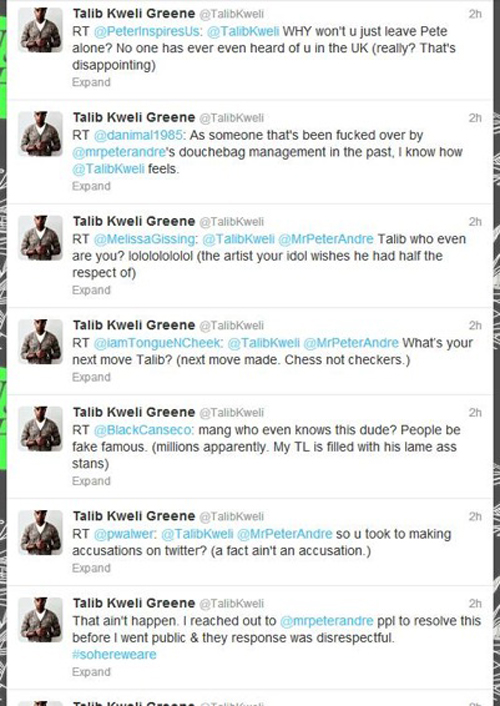 So in summation I’ve learnt two things today – Apparently Peter Andre still makes music, and the co-founder of the poignant musical force that is Black Star tweets like a fourteen year old girl texting her bestie during history class.