Our interview with the lads is one of our most read posts ever on the site, so we know you’re hungry for it and we’re stoked to be a part of bringing our brethren from NZ to our shores. So don’t miss out… grab your early bird tickets next week! Info and dates below…

Off the back of launching their self-titled double album (the first hip-hop album to debut at #1 in New Zealand since 2003) by throwing a 48-hour party in an old brothel, having their controversial pop-up store closed down early, then touring the carnage around NZ, Home Brew are bringing the party to Australia.

Home Brew will be showcasing tracks from their critically acclaimed double album – a piece of work that after three years of dedication and benefit fraud, is good enough to move them out of their Mum’s place. Conceptualized by the balance of life’s extremities, one side is light, the other, dark. It’s a dichotomy of methadone and melancholy. Infinity and finality. It’s a record that looks back at Saturday’s moment of madness through Sunday’s moment of clarity, and something you definitely won’t want to miss live.

HOME BREW
(With support from Sky’High)

EARLYBIRD TICKETS ON SALE MONDAY 2ND JULY AT 9.00AM 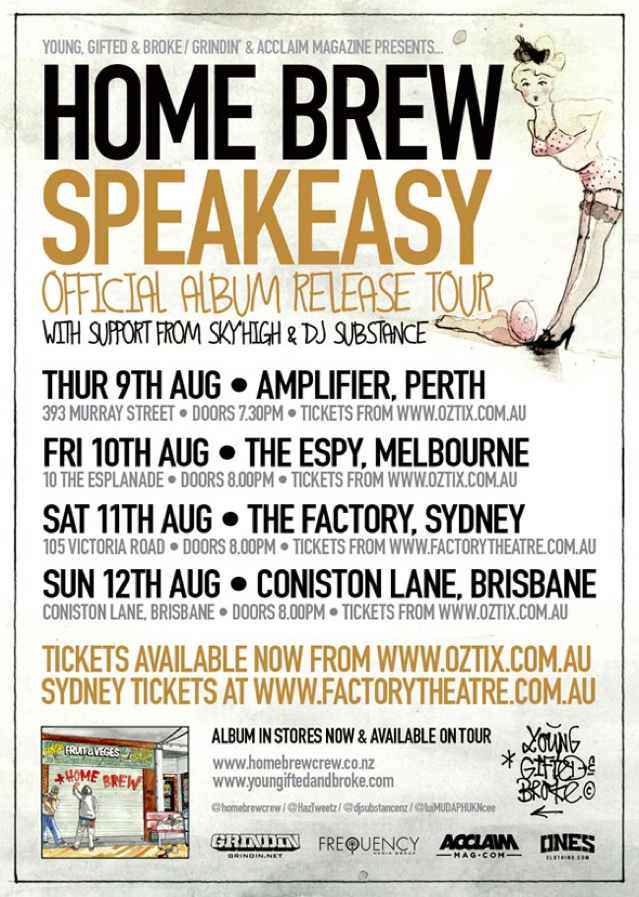