Tyla Yaweh Gets The Most Out Of Life

The Florida rapper gets inked and chats growing up skating, pink Lamborghinis, and Birdman.

23-year-old Tyla Yaweh is having the time of his life. The Florida born rapper has had a non-stop 12 months, racking up millions of streams, touring across America, and getting roasted by Jimmy Fallon. He’s just touched down in Australia for the first time as the opening act on a gargantuan stadium tour alongside Jaden Smith and bestie Post Malone. As it turns out, the young musician isn’t too fazed by the scale of the shows, telling me he’s having the time of his life, performing every night and skateboarding with Jaden in his downtime.

We asked Tyla what he wanted to do with his day off in Melbourne and he told us he wanted to get tatted. In a bid to be the most hospitable stop on the tour, we hit up our friend Mez Afram at Green Lotus tattoo and she was more than happy to give him a zap. Tyla pulled up in good spirits, donning a customised military vest he’d hand painted.

After picking out a design and adding some customisation—a broken heart, as he’s a self-proclaimed ‘sad boy’—Tyla jumped in the chair and braced himself for the sting. “Just knock that bitch out”, Tyla told Mez, wasting no time. As the tattoo commenced, we got to chatting about growing up in Florida, hanging out with Birdman, and what to do when you cop yourself a pink Lambo.

Tyla, what’s up man? I wanted to start off by asking what was going on in your life growing up in Florida?
Well, I didn’t really go to school all too much. I went but I was in the studio a lot so I didn’t graduate. I did the whole elementary to middle school but when I got to high school it was like “Fuck this shit, I can’t do it any more.”

So you just started focusing on music from high school age?
Yeah I was doing music, I was in the studio every day and I dropped this song that gave me like a cool popularity in school, it started to get some local radio play and that kind of stuff, it was part of my life from early [on]. I had to work hard to get some money, I had to sell a little weed, do a little of this and that. I did a lot of crazy stuff when I was a kid but I still kept with the music.

So would you say your musical journey started as your way of getting out of certain bad situations in life?
Yes for sure, but it’s just the love of music really. In my early days skateboarding helped me develop a love of music. I love bands like Hawthorne Heights, The Doors, The Sex Pistols, then I’d listen to MF Doom or Hot Boy$, I just loved music.

So you have roots in punk rock?
Yes for sure, you can tell a little bit right?

This is pretty punk right here, you’re getting interviewed and inked at the same time. Who’s your punk icon?
Sid Vicious. The attitude and style, he wore hell Vivienne Westwood and stuff. She’s an OG. I still wear it, I have a lot of stuff from Vivienne Westwood. 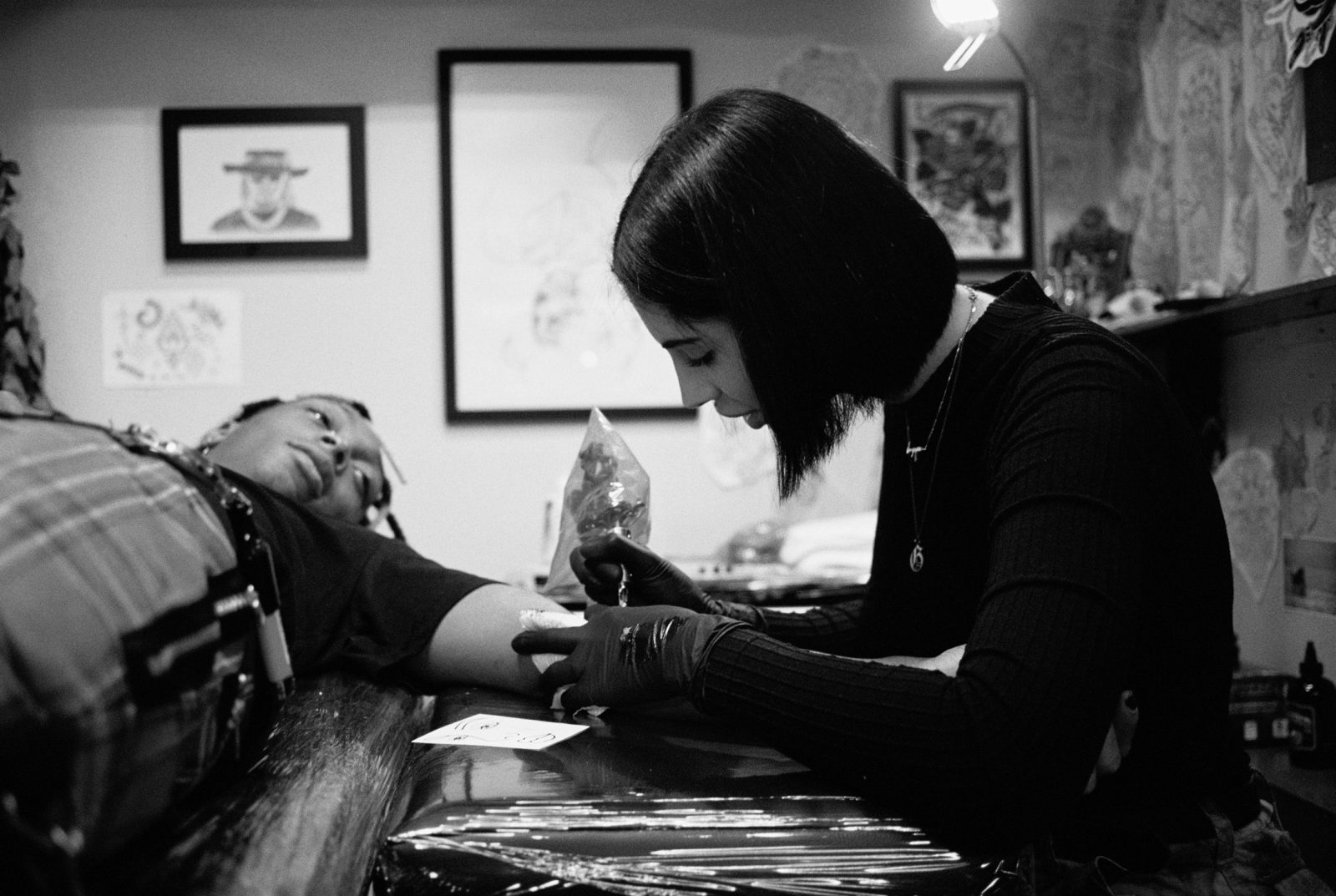 So you started out opening for a lot of rappers when they would come through Florida. Who were some of your highlights to open up for?
The first big show I did was opening for Juicy J and it was crazy, we had that bitch rockin’, I had everybody on the stage and—oooh [winces and laughs]. This is dope getting a tattoo mid-interview.

Different songs call for different situations in the studio, I feel. I heard you’ve been in the studio with Birdman before, how did that go down?
My homie, Caskey, who’s signed to Cash Money, he introduced me to Birdman and got me in the studio with him and we went on tour with him before I moved to LA. And it was just dope, you know. He really fucked with my vibe, and he loved how I was making music and stuff.

I remember the day he asked me to make a song. He was like “Yo Neph, I need you to make me a song that’s like ‘Bitches on bitches on bitches’”. So I made him a song about women, you know? The conversations we had were priceless because he’s such an OG in the game.

Does he give good advice?
He gave me some very good advice. I feel like a lot of people who’ve made it in the game, have gotten advice from Birdman.

Who’s been a standout artist to work with in the studio?
You know my brother, Juice WRLD, PnB Rock, Ty Dolla $ign. There’s a lot of people I really fuck with. I just vibe with.

Can you tell me about this tour so far? From what I’ve seen online, it looks like you’re just skateboarding and hanging out with Jaden and Post. Is this the chillest tour you’ve ever been on?
Man, every tour I’ve ever been on has been like raw and dope. So I just love being on the road, I love connecting with the fans, I love enjoying life, you know? Ah, fuck! [Winces]

At what age did you get into skateboarding?
Like five.

You’ve been skating your whole life. Who are some of your skateboarding icons?
Bastien Salabanzi, Stevie Williams, who is one of the homies. Oh, that feels good. Fuck yeah. What were you saying? [Laughs] Torey Pudwill, Stevie Campbell. Fuck, Kareem Campbell, I’m getting tattoo drunk [and] I said Stevie Campbell.

Did you grow up playing Tony Hawk?
Yeah! Definitely. Underground was better though.

I heard you’re trying to buy a pink lambo at the end of the year. Where’s the first place you’re going to take it?
I probably won’t drive it, because I don’t like driving. But I might have somebody drive me to Malibu. Probably do some burnouts in the parking lots.

What does it say on your eyelids?
Good vibes.

What’s the first tattoo you ever got?
Oh man, these silly ass initials on me, but I still got them. I never finished them on purpose.

Are you gonna keep them half done forever?
Yeah. 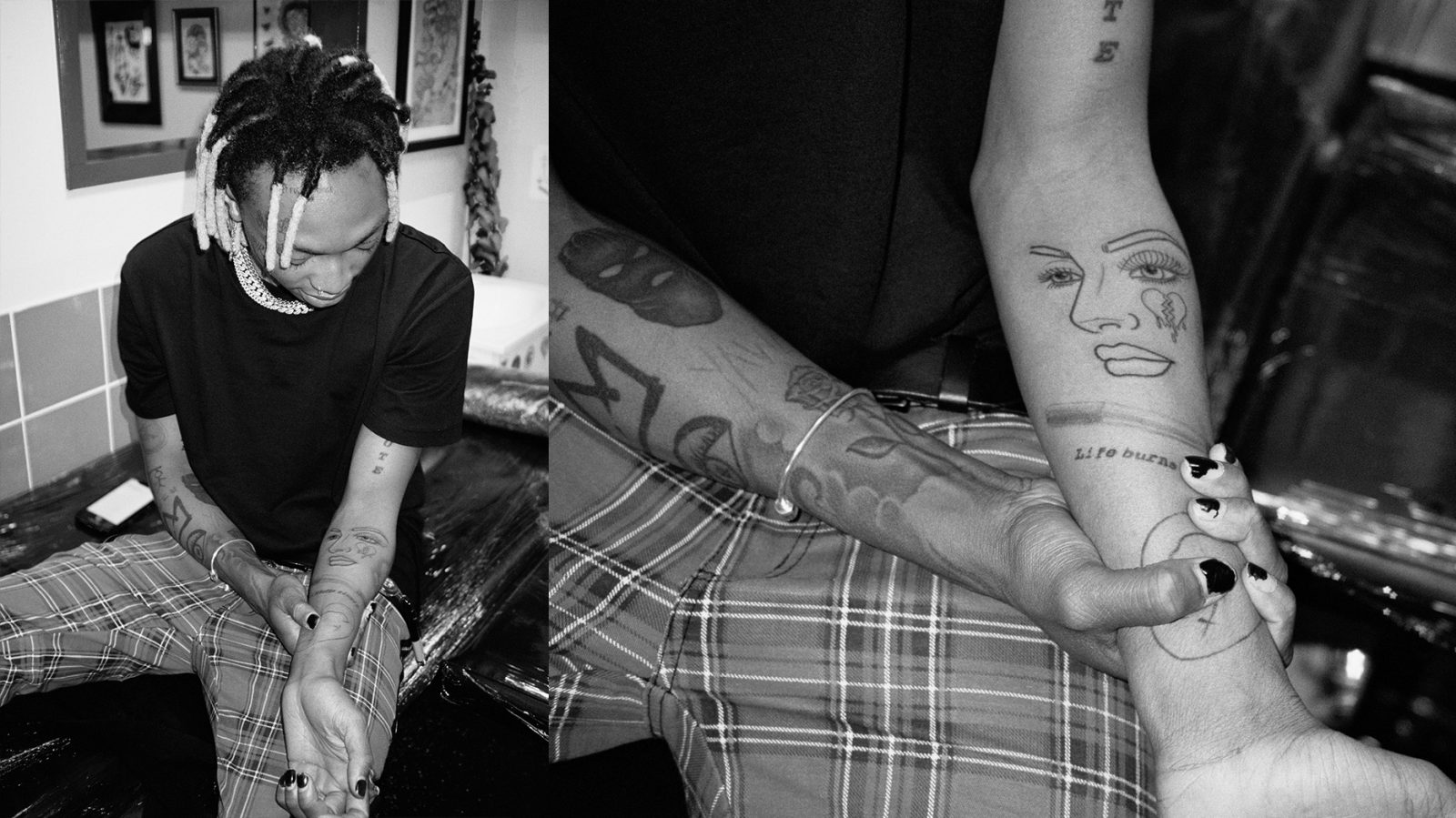 I’ve heard you’re a big Young Thug fan.
Hold up, we gotta get through this part first before we finish this. Oh man, I knew this part was going to be a bitch. Yeah, Young Thug is such an inspiration when it comes to music man.

Yeah, he’s my all-time.
His melodies, he’s just so free. He can be himself, he’s teaching the world to be themselves.

Mez: Wait, I thought you said you were going to fall asleep?

Tyla: Yeah but this part right here is crazy! Oh my god! But I’m getting interviewed and tattooed at the same time. This is crazy. So much to think about.

You told me before, you own a weed company. Can you tell me more about that?
It’s coming soon! Frat Boys. It’s under a company called LGM, it just went public. So like public is huge, super huge.

You gonna have your own strains?
Oh I have a lotta strains already. We got Hangover Sunday. We got Watermelon Punch, we got Juicy Fruit. We got a lotta good strains. We got the Yaweh cookies too.

[Laughs] My man! You gotta put your name on some of them.