Just when I’d gone all black, tried purple drank and slowed my favorite songs down by 30 BPM, a new age in fashion is dawning, and I’m screwed because I am incapable of owning white sneakers.

I knew something was awry when I kept noticing people show up to parties wearing white cloaks. More like white capes, but there’s something eerie and religious about seeing a person wander around drenched in fog from a fog machine wearing all white and holding a beer or something. That shit is interesting to say the least. But it’s not just that guy. White is a trend we see happening in the fame matrix and in many luxury collections we saw walking Spring 2014. We’re ready for something new this summer. Maybe I’m finally grown-up enough to own white jeans. 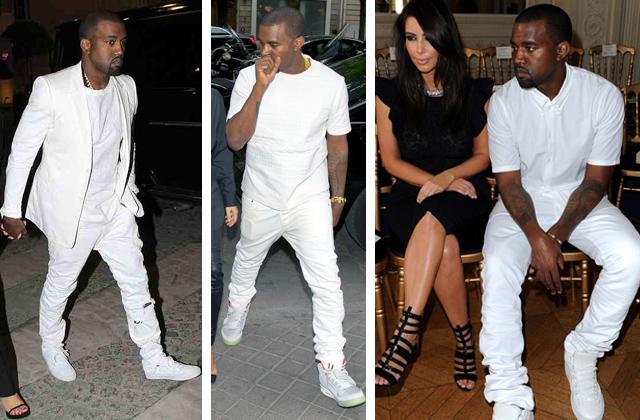 When thinking all-white, it’s easy to remember when Kanye showed up at Kim Kardashian’s spot and threw out all her turquoise maxi dresses or whatever she was wearing at the time and replaced them with black and white pieces. Paparazzi photos showed pre-baby Kimye hitting the scene with him in all-white and her in all-black – a monochromatic match made in fame-whore heaven. We could say Yeezy started this all-white thing, but he was just an early adopter. He made it visible for the masses, and we all know that fashion trends are easy to try out into once Yeezy did it. A$AP Rocky is a champion of Jil Sander. He shouts the designer out on both his releases and infamously knows his shit when it comes to high fashion menswear. He’s been doing the all-white thing over the last year. Above, you see him rocking a quilted white leather jacket. Next to him you’ll see Jil Sander’s white shell leather jacket from the Spring 2014 collection. So as you can see by how awesome (yet impractical) white leather is, it’s probably making its way into your wardrobe whether you like it or not. More Jil Sander below. 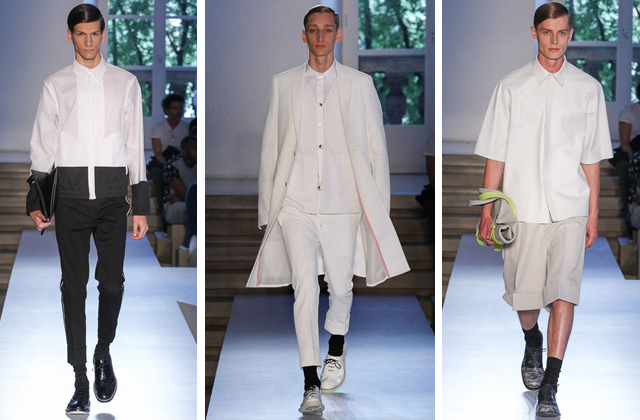 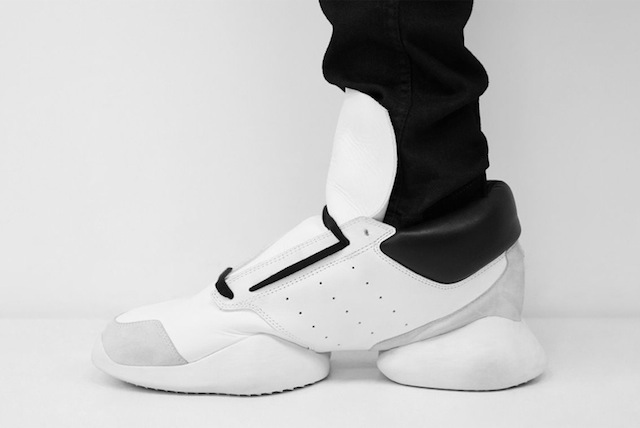 Of all the designers who collaborated with adidas this year to create new sneakers, Rick Owens’ pair take the cake as the most boss. His almost completely black spring 2014 collection was accented by the contrast of these futuristic bad boys. They take a Jordan-esque silhouette to a futuristic level. 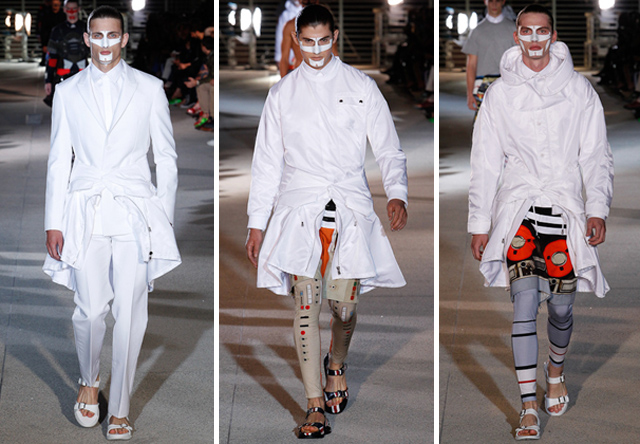 Capitalising on the success of last year’s use of color and graphic distortion, Givenchy really pushed the prints this season. But when prints weren’t being blasted all over the shapes and silhouettes, there was a noticeable use of white in the collection. Above you’ll see an all-white suit that only Macklemore, Pitbull or some asshole rapper will take onto a red carpet. But it’s a good look, nevertheless. Lots of designers played with volume or draping around waists again this year. It’s happening. Deal with it. 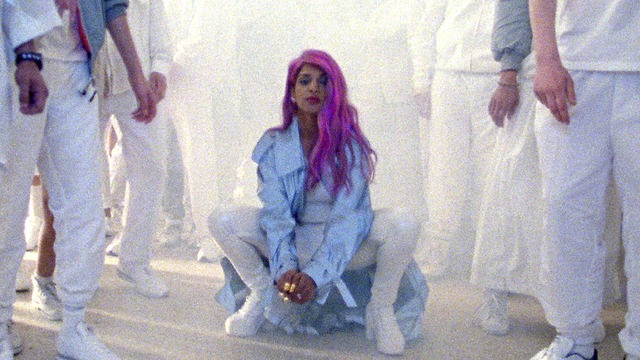 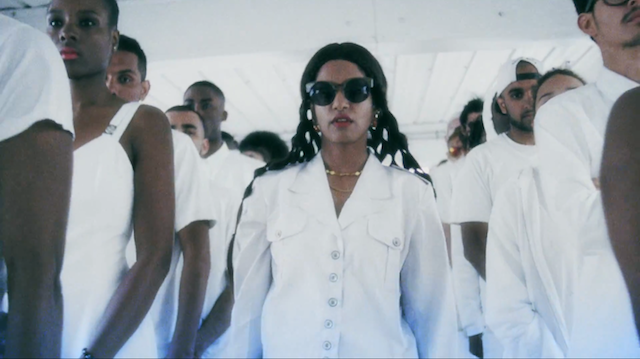 You may be familiar with the Bring The Noize video at this point – a new clip in which everyone wears white. At first we didn’t know what to make of this wardrobe decision (especially coming from an artist who usually believes that more is more when it comes to everything), but now that we have other recent references to bounce this all-white thing off of, we see that this is just where things are going: to the late ’90s when Diddy was throwing white parties and huge pop stars wore white trackies with jerseys and women wore white crop tops. You’ll notice below that M.I.A.’s Bring The Noize promo photo bears a striking resemblance to The Backstreet Boys’ Millennium album cover. Coincidence? I think not. Pop pariah Miley Cyrus wore all-white in the most raunchy, stylish and viral shot of her new video We Can’t Stop. Channeling the Spice Girls and late ’90s fashion with her platform x sports bra combination, Miley is giving club rats everywhere fashion inspiration. I’m pretty sure that girl who fell off stage at the A$AP concert last week was wearing this and managed not to spill her beer. White pants are a dangerous place to go as a smoker, a woman or any real-life human being. But below you’ll see that Miley is jocking Britney Spears’ swag as well as 65 percent of the Spice Girls. 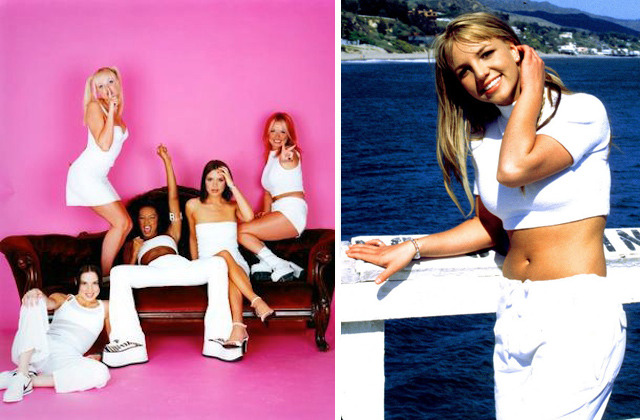 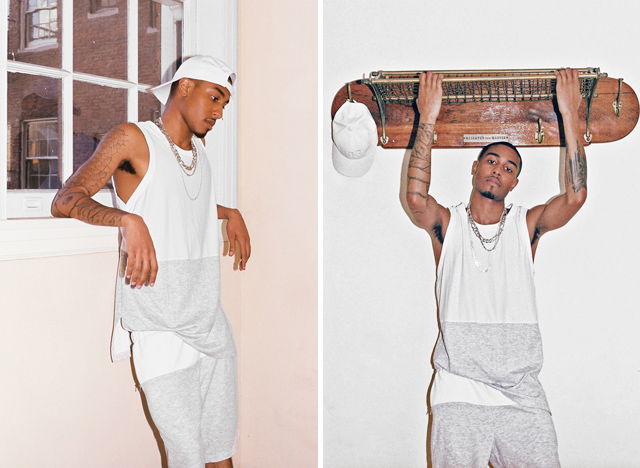 The white leather basketball jersey could totally explode this summer. That might sound fugazi, crazy or totally swell. But all I know is I want one. Only the closest thing I could find was a jersey-fabric jersey with white leather accents from Made By U$. White will have its day in streetwear, mark my words. If we all just learn how to drink beer more carefully and we could actually see the day when white jeans are feasible, white sneakers happen regularly and I own a white varsity jacket with white leather sleeves. Close your eyes. You can see it. 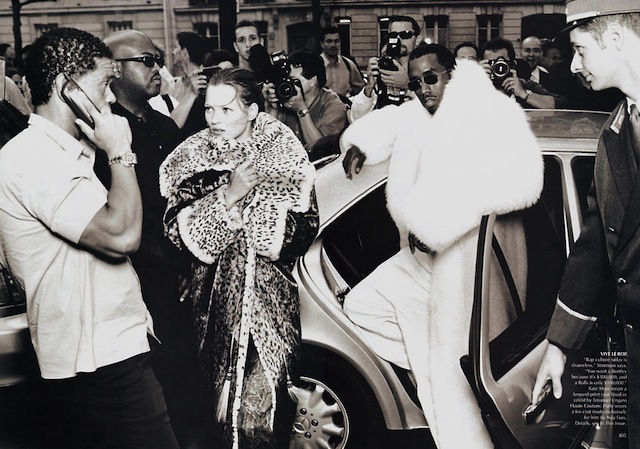 But it’s Puffy who’s most pleased with all of this information. He’s been wearing all-white and throwing white parties throughout all of the naughties, and you know he’s home now reveling in his stylistic intuition. In honor of that man and further confirmation that fashion cycles consistently go full circle, watch Been Around The World below, sing like Biggie and enjoy the Paul Hunter–directed white suit madness.